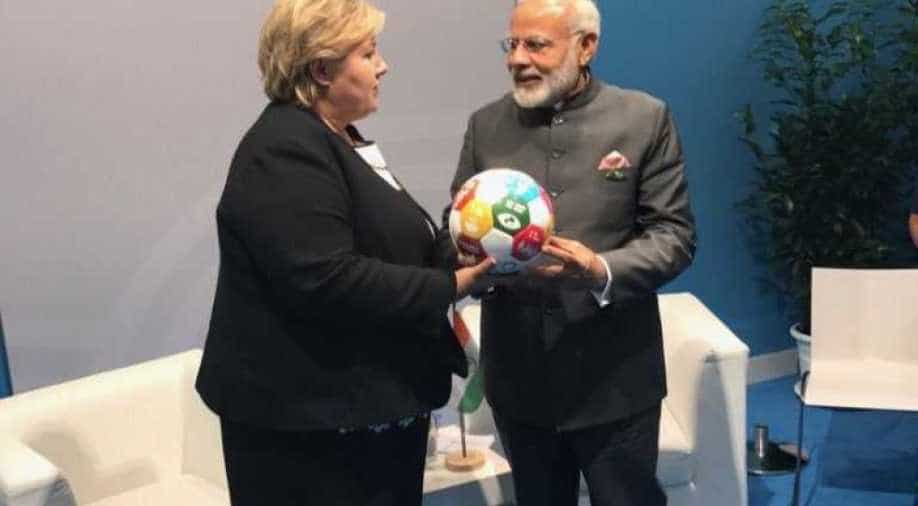 During the visit, the Norwegian PM will deliver the inaugural address at the Raisina Dialogue and will address India-Norway Business Summit.

During the visit, Prime Minister Solberg will be calling on President Kovind and Vice President Naidu; she will also hold talks with Prime Minister Modi. Other than this, she will deliver the inaugural address at the Raisina Dialogue and will address India-Norway Business Summit.

According to the official Ministry of External Affairs release, "The upcoming visit of Prime Minister Solberg will provide an opportunity to the two sides to review the progress in bilateral cooperation and discuss ways to further expand the multifaceted partnership in areas of common interest. "

Solberg and PM Modi last met in 2017 and 2018. In 2017, during her meeting with PM Modi on the sidelines of G20 Summit in Germany, Solberg gifted PM Modi a football. The football had SDG -- Sustainable Development Goal inscribed on it. The gesture was to symbolise attainment of Sustainable Development Goals (SDG). During the meeting at G20, PM Modi invited the participation of Norwegian pension funds in the National Investment and Infrastructure Fund.

Last year, PM Modi met the Norwegian counterpart during the maiden India Nordic summit in Stockholm on April 17. During the summit, India and Nordic countries pledged to deepen cooperation and focus on key issues relating to global security, economic growth, innovation and climate change. The annual India-Nordic trade is about $5.3 billion. The cumulative Nordic FDI into India has been recorded at $2.5 billion.

More than 100 Norwegian companies have invested in India in areas such as ship-building, petroleum-related services, hydropower, clean energy and IT services. Several major Indian companies are also present in Norway.

As many as 12,924 Indians (9,485 Person of Indian Origins (PIO) and 3,439 NRIs) are in Norway. According to the official Norwegian Immigration Department figures, India has become the leading source of foreign skilled professionals working in Norway. The number of skilled professionals from India went up from just 100 in 2005 to around 2000 in 2014.