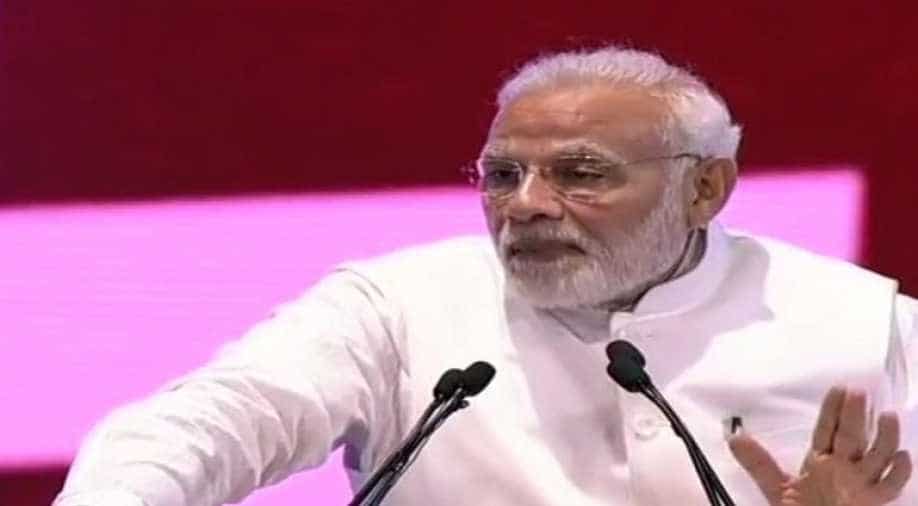 Prime Minister Narendra Modi on Thursday said every paisa of every rupee released by his government reaches the poor as there is no place for middlemen and asserted that his endeavour is to provide every Indian family a home of its own by 2022.

In an apparent jibe at former Prime Minister Rajiv Gandhi's famous comment about only 15 paise of every one rupee released by the centre reaching the targetted beneficiary, PM Modi said, "If one rupee is released from Delhi, the entire 100 paise (now) reach the house of the poor."

Addressing a public gathering in this Gujarat village after a collective 'e-gruha pravesh' (online house warming) event for beneficiaries of the Prime Minister's Housing Scheme for Rural areas, PM Modi said people now do not have to pay bribes to avail benefits of the centre's flagship housing scheme.

PM Modi said he dreams of every family owning a house of its own by 2022 when the nation will celebrate 75 years of independence.

According to information available on the Rural Development Ministry website, 18.22 lakh houses were completed under the erstwhile scheme in 2015-16, while the number rose to over 32 lakh in 2016-17 and 44.54 lakh in 2017-18 after taking into account houses built under the new scheme and completion of incomplete houses started under the previous scheme.

The scheme aims to provide a pucca house with basic amenities to all houseless families and those living in kutcha and dilapidated houses by 2022.

It provides unit assistance of Rs. 1.20 lakh in plains and Rs. 1.30 lakh in hilly areas, besides other benefits. The assistance cost is shared between the central and state government in the ratio of 60:40 in plains and 90:10 for North Eastern and Himalayan states.

"While talking to the women beneficiaries of the Pradhan Mantri Awas Yojna, I was watching the houses behind them. Even you would be wondering how such good quality houses were built under that scheme," PM Modi said, referring to his interaction through video conferencing with some beneficiaries.

"This was made possible because there is no place for middlemen in my government," he said.

PM Modi said his government has the "guts" to ask the women beneficiaries -- when the entire country is watching and the media is present -- if they had to pay any bribe or commission to get the houses.

"In reply, the mothers and sisters could say with satisfaction that they got the houses according to rules and they did not have to pay a single rupee bribe," he said.

Prime Minister said his government has paid due attention to ensure that these houses are of good quality.

"Gujarat has taught me a lot. It has taught me to fulfil dreams within a specific time. It is my dream, it is our endeavour to ensure that every Indian family has its own home by 2022," he said.

PM Modi said the government has given money for building the houses, but these homes have also been built with the "sweat of the family".

"The family decided how will the house be, what material will be used and how will it be made. We put our trust in them and not on contractors. When a family makes its own home, it makes it the best," PM Modi said.

While interacting with women beneficiaries, he asked them about their experiences of owning a concrete house, quizzed them about cleanliness, education of the girl child, supply of water, power, and gas connections under the Pradhan Mantri Ujjawala Yojana.

He asked some women if they had to pay any bribe to the middlemen to get the amount of around Rs. 1.5 lakh under the housing scheme.

PM Modi said bribery was not possible as the money was transferred directly into accounts of the beneficiaries.

As many as 1.15 lakh concrete houses have been constructed under the scheme across 26 districts in Gujarat and its beneficiaries are the rural families.

On the occasion, women beneficiaries of the Chief Minister's Gramodaya Yojana were also given certificates of vocational training.

Referring to the government's drive to provide electricity to all, PM Modi said in the next 1-1.5 years, no home will be left without power in the country.

At the function, he also performed ground-breaking ceremony through remote control of a Rs. 586 crore water supply project to provide drinking water to around 175 villages situated in hilly areas of Valsad district.

PM Modi said he had spent time in Vasad's tribal areas in the past and therefore he knew about problems faced by its people.