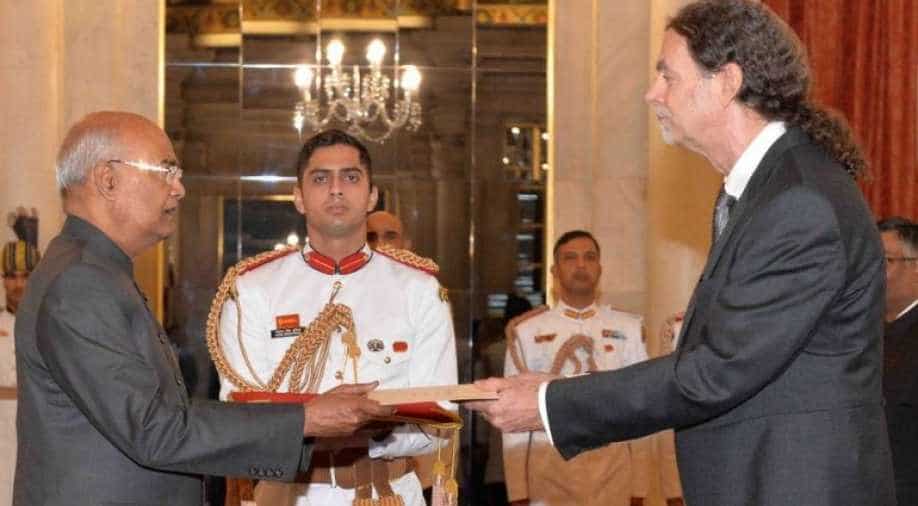 Germany's new envoy to Delhi, Walter J Lindner is an active musician and has served in Kenya, Nicaragua, New York among others. He was also Special Representative of the German govt for the Ebola Crisis.

WION: You presented credentials to President in Hindi. Why so?

Walter J Lindner: Because I think, one should respect the country where you are stationed, I tried my whole life to do that, to pick up the language. Now I'm here for 6 weeks, I might not be fluent, but ask me the same question in 6 months, I will reply in Hindi. This is an act of respect, it is a great language.

Walter J Lindner: Chancellor will come again to India, at the end of the year. we have not yet fixed the date, but it will be October and November. We have a lot of common interest. One is multilateralism, other is the maintenance of peace, other is UN system, fight against terrorism, the future of technology, future of work like what we will do in 20 years with things going automatic, artificial intelligence. There are so many things both of us are in the same wavelength.

WION: Germany has backed India on the issue of terror. How do both countries plan to tackle the issue?

Walter J Lindner: We will work together very closely in the UN and we will keep informed bilaterally. I will see colleagues in the foreign ministry. So we will see, what's on the agenda and how can we have a common position. As I said, we are both of the conviction that terrorism is something which has to be eradicated from the planet. Maybe it is not possible, we have to do everything we can.

WION: How do you see Indian elections and expectations from the new government?

Walter J Lindner: First of all what we have seen is the biggest elections on this planet in humankind. Never before so many people have voted, and the way it was organised, all these voting machines and all these different voting dates. Its a world record in organising elections. So congratulations. We are confident whoever wins will have strong ties with Germany and will continue the close cooperation.