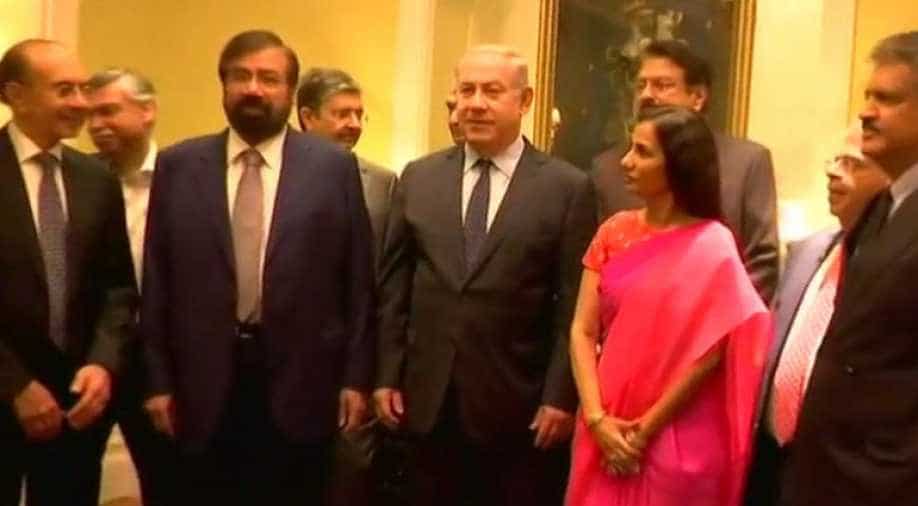 Israel Prime Minister Benjamin Netanyahu today met top leadership of India Inc for a power breakfast, the first of his numerous assignments for the day as he wraps up his four-day India visit.

Netanyahu interacted with business leaders at the iconic Taj hotel overlooking the Arabia Sea. This will be followed by his address to the India-Israel Business Summit, also at the same venue.

Future belongs to those who innovate; innovation doesn't happen by itself, it has to be encouraged: Netanyahu to business leaders.

In the first visit by an Israeli Prime Minister to the financial capital of India, Netanyahu will lay a wreath at the memorial for the victims of the 26/11 terror attacks.

Netanyahu will then proceed to the nearby Nariman House, where he will meet 11-year-old Moshe Holtzberg. Moshe's father Rabbi Gavriel Holtzberg and mother Rivka were killed at the Nariman House during the 2008 Mumbai terror attacks.

The Jewish couple ran a cultural and outreach centre for the Chabad-Lubavitch movement at the Nariman House in south Mumbai's Colaba area.

Netanyahu will later meet around 25 to 30 members of the Jewish community at the Taj hotel.

There are about 5,000 members of the Jewish community living in India, but most of them call Mumbai their home. The city earlier had a sizable Jewish population, but around 33,000 Jews migrated when Israel was created.

Mumbai has three distinct Jewish communities -- Bene Israel Jews, Baghdadi Jews and the Malabar Jews. For them, the visit by the Israeli prime minister is about reconnecting with old friends and strengthening old bonds.

Netanyahu will cap his hectic schedule by attending the 'Shalom Bollywood' event, in which he will invite leading actors, directors, and producers in the Indian cinema industry to come to Israel to shoot movies and collaborate with the Israeli film and television industry.

Netanyahu is accompanied by a 130-member business delegation representing 102 companies, with a focus on the agriculture, defence and cybersecurity sectors.

The bilateral trade between the countries increased to USD 5 billion in 2016-17 from USD 4.91 billion in the previous fiscal.

In the first leg of the visit in New Delhi, Prime Minister Narendra Modi had invited Israeli companies to invest in the country, saying India presents vast opportunities.

India has received total FDI of USD 130 million from Israel during April 2000 to September 2017 period.

Netanyahu will leave for Israel in early hours tomorrow.