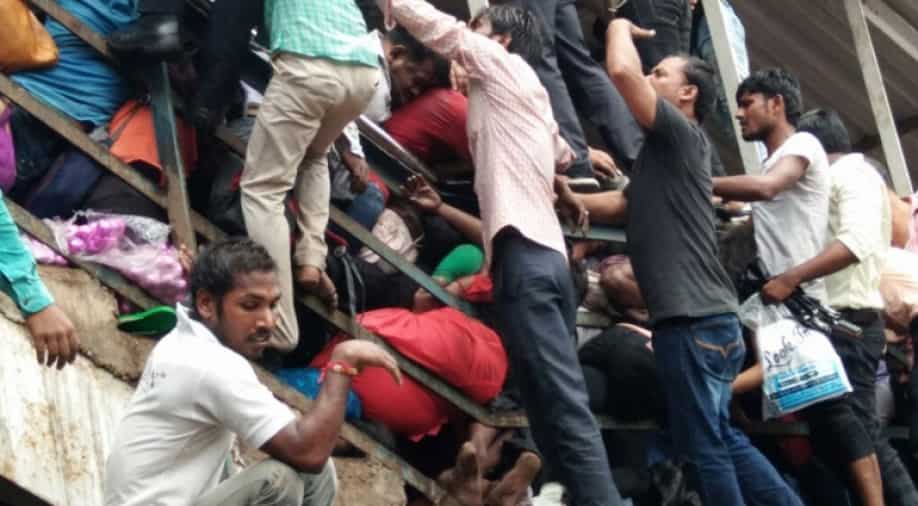 Twenty-three people died in the stampede and 39 were injured. Photograph:( Zee News Network )

A five-member committee that was probing the Mumbai stampede which killed 23 people has said rain and rumours were to blame.

The committee, which was constituted by the Railways, has given a clean chit to Railway officials.

The committee, news reports said, has also accepted the theory that a flower seller's cry of "Phool gir gaye hain (The flowers have fallen)" was misheard as as "Pul gir gaya hain" (The bridge has fallen) which led to panic.

The committee, the reports said, had questioned 32 people while investigating the tragedy.

The stampede broke out at 10.40 am on September 29 on the footover bridge connecting the Elphinstone Road railway station to Parel station.

The bridge was already crowded at the time with people trying to get out of a downpour taking shelter on it.

Four trains pulled into Elphinstone station at the time, and the added commuters led to massive overcrowding on the bridge.

Next came the stampede.

Western Railways had on September 29 already said what the five-member committee is now reiterating.

Western Railways had by the evening of September 29 itself blamed the "unprecedented rains" and the "overcrowding at the exit", saying that "rumours led people to panic".

But commuters at the time had told a different story.

Some placed the blame squarely on the Railways, saying the stampede was a disaster waiting to happen.

In addition to its findings, news reports said the five-member committee has recommended the widening of the footover bridge. News reports said bids had already been invited.

The committee has reportedly also recommended that encroachments be removed from around the footover bridge, and obstructions from on it.

Moneycontrol.com reported that the committee has also recommended that commuters with heavy luggage not be allowed on the footover bridge during rush hour.