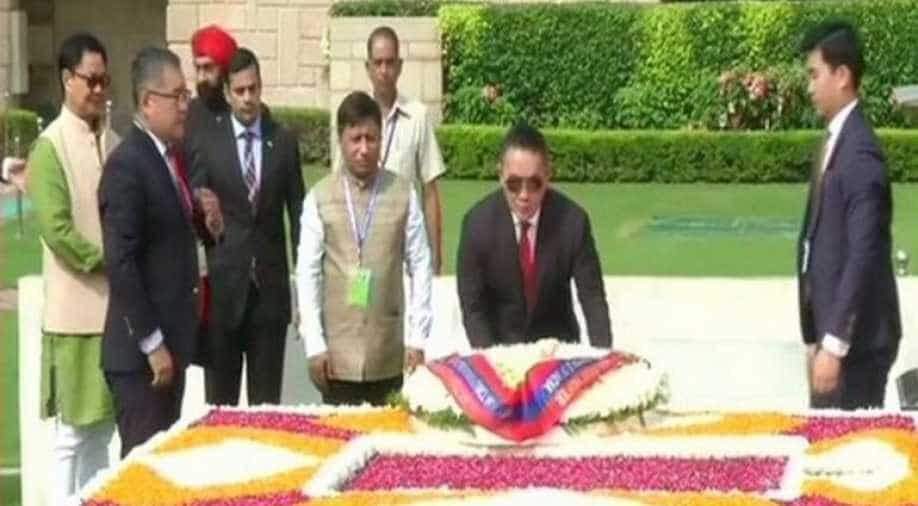 Battulga on Friday paid a tribute to Mahatma Gandhi at Rajghat here. He was joined by the Union Minister, Kiren Rijiju.

Earlier on Thursday, Khaltmaagiin Battulga, the President of Mongolia arrived in India on a five-day visit to intensify bilateral ties between the two countries. Prime Minister Narendra Modi and the Mongolian President will jointly unveil the statue of Lord Buddha at Gandan Monastery via a video conference later today.

Battulga on Friday paid a tribute to Mahatma Gandhi at Rajghat here. He was joined by the Union Minister, Kiren Rijiju. Earlier today, Battulga received a ceremonial reception at the Rashtrapati Bhavan here and was received by the President, Ram Nath Kovind.

"I am very happy that I am on a state visit to India with which [sic] we have centuries of spiritual and cultural relations and ties", President Battulga said. "We [President Ram Nath Kovind and I] were elected around the same time in July 2017, and I would like to invite the President of India to pay an official visit to Mongolia", he added.

The Mongolian President will also meet Vice President M. Venkaiah Naidu. Battulga's visit to India is the first state visit by a Mongolian President in the last 10 years, the Ministry of External Affairs (MEA) said, noting that the two sides will hold in-depth discussions on a range of bilateral, regional, and global issues.

It also said that the two countries would review ongoing cooperation in the fields of infrastructure, energy, disaster management, defence, security, culture, and capacity building. The two countries had reached a strategic partnership in 2015 during the visit of Prime Minister Modi to Mongolia. Several high-level exchanges have taken place since then and the partnership has seen considerable progress during the last few years.