Meet new age Robins: This India based civic body is feeding millions of homeless across the globe 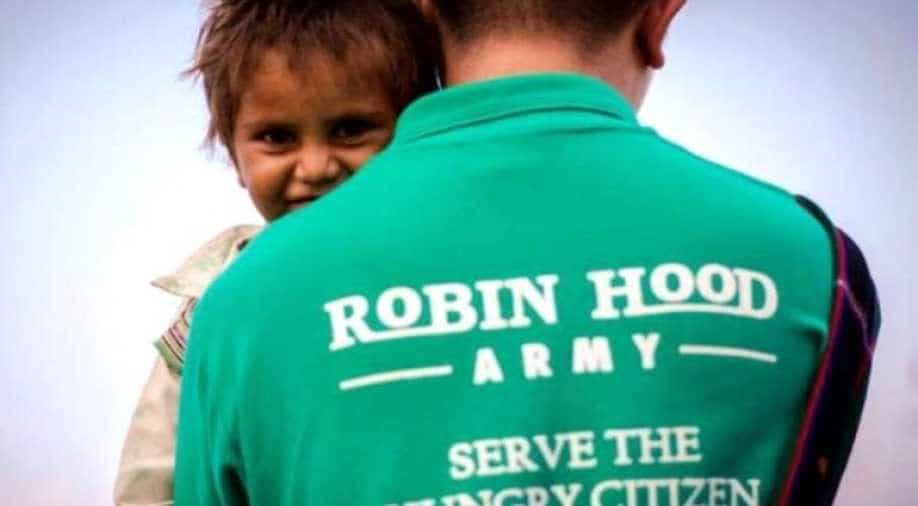 Meet India's Robin Hood Army, a zero fund organisation that recently fed 30 million people across 182 cities to mark India's Independence Day and even got a shout out from Amitabh Bachchan for their work.

As India celebrated its 74th Independence day of August 15, Bollywood stars took to social media to wish their fans on a special day. Superstar Amitabh Bachchan too shared warm wishes for his countrymen but it was a tweet about one Robinhood Army that stood out.

Bachchan gave a shout out Robinhood Army,  a civic, no-profit organization that has been tirelessly working to feed the millions of homeless across the world since 2014. Comprising of young professionals, the organization which began in Delhi in 2014 has people volunteering to provide food to the underprivileged during their free time.

On August 15, Bachchan mentioned RHA's founder Neel Ghose, and tweeted, "Wishing Neel and his ROBIN HOOD ARMY ( RHA ) my best wishes for their incredible work in feeding the hungry .. It was a delight to have you on KBC and now my very best for .. CoVid Fightback - #Mission30M"

T 3628 - Wishing Neel and his ROBIN HOOD ARMY ( RHA ) my best wishes for their incredible work in feeding the hungry .. It was a delight to have you on KBC and now my very best for .. CoVid Fightback - #Mission30M .. ❤️🌹🤗 pic.twitter.com/V0qlWNp8qK

What is #Mission 30M

Like every year, on India's independence day RHA had taken upon themselves the herculean task of feeding 30 million from mid- July to August 15 i.e India's Independence day.

The mission is the largest food relief effort that any civic organization has ever put together.

The task on hand was not an easy one. Spread across 182 cities and 10 countries including India, Bahrain, Nepal, Sri Lanka,Kenya, Malaysia, Botswana, Philippines and Pakistan, the campaign had to involve 50,000 volunteers who took out time from their schedules, coordinated with corporate giants for food supply and made Missio 30M a dream project. The project saw its completion on August 15th.

Since its inception, RHA has aimed to be a zero-fund organisation that ties up with local NGOs, volunteers and big corporates to serve the underprivileged.

RHA's unique model has even been picked up by the prestigious Harvard Business School as a case study in November 2018.

As pandemic led to an economic slump, several people were left without jobs. Mission 30M also aimed to serve those who had lost their livelihood due to the pandemic.

Considering the extent of the project was mobilising volunteers and tuning up with corporates outside of India a difficult task. "It differed from city to city. Pakistan alone took care of 20 percent of the entire number. 5 million people were fed in Pakistan alone with volunteers tying up with big corporates. In other countries, it was hyper-local. Like in Malaysia, the residents tied up with local bodies to feed the underprivileged in their areas," said Neel Ghose while speaking to WION.
"In Pakistan, Botswana- our volunteers went to rural heartlands to feed the hungry while in Philippines, RHA was led by industrialist who used their network to reach out to people in need," added Ghose.

While every city has a different way of operating, there are certain guidelines that RHA insists on following. Volunteers are typically trained on how to mobilise and also how to reach out to the underprivileged and what safety guidelines each volunteer had to follow/ Because of pandemic, the volunteers were provided with masks and had to sign a safety consent form that gave detailed instructions on safety guidelines they would adhere to while working field. "They had to sign and declare that they were not living with any senior citizen at home," Neel added.

For food, RHA collaborated with big corporates like Nestle and Godrej who provided food for half a million of people.

They used their network to flood-hit areas of Assam, Bihar. Local partners- including restaurants and small industrialists provided grains and other food items in various cities. Ghose also says that volunteers too took charged and mobilised food at hyper-local level.

Ghose reveals that they reached out to more people through media which not only helped them create awareness about their Mission but also called for more volunteers.

Robins, as the volunteers of RHA are typically called, also did a ground-level research to identify areas that needed help. "A village 30 km away from Mumbai has people dying of starvation. Our Robins would scout such areas for maximum spread of the mission," recalled Neel.

"The easiest for some people is to write a cheque for us which we are completely against. In the process, we leave a lot of food on the table, but that's our policy. We don't take financial assistance, we rather have people providing food items," said Neel.

Considering the scale, did they ever think of tying up with state governments to reach out to a large number of people? "In some cities, we have collaborated with the state government. We leave that call to local cities. But we are also an apolitical organisation. We ask volunteers to keep their political ideologies aside while serving the needy," said Neel.