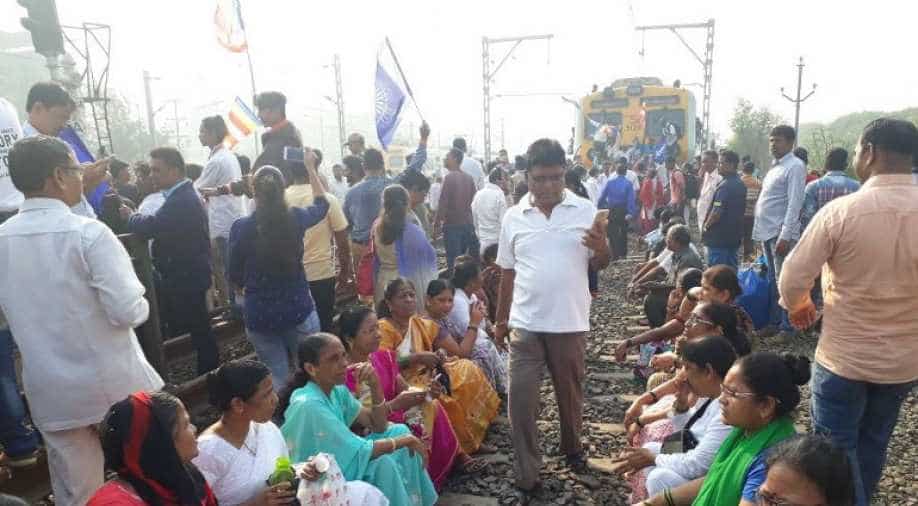 Mumbai's iconic dabbawallahs have said they will not be delivering their tiffin boxes today. Photograph: ANI

The bandh was called by Prakash Ambedkar, the Bharipa Bahujan Mahasangh leader and BR Ambedkar's grandson

Suburban train services disrupted at Ghatkopar station due to the bandh called by Dalit outfits in the state.

Both up and down lines, which were blocked byprotesters from 12.05 hrs have been evacuated at 12.24 hrs and train operations have resumed at Goregaon, Mumbai. Trains are delayed due to it, says Western Railways

Pune: Security arrangements in Dandekar pool in view of protests over #BhimaKoregaonViolence, DCP Pravin Mundhe says, 'we appeal all citizens to carry on with their daily routine. There will be peace in the city. Don't trust rumours being spread on social media' pic.twitter.com/7E0s3TFNqF

Commuters stranded due to few auto-rickshaws and other transport in Mumbai.

"We are supporting this bandh only because we are scared of our loss. They can vandalise anything here," says auto-rickshaw driver in Mulund

"It was left for the parents to decide if they want to send their their children to school, hardly 50 students came today. So now we are even sending them back home, teachers will also leave thereafter" says a teacher at Mumbai's Young Ladies High School #BhimaKoregaonViolence pic.twitter.com/YVjlO41rwm

Many schools in Thane shut

Following diversions have been affected due to the agitations

"Due to certain agitations, traffic congestion is reported on Eastern Express Highway (at Ramabai Ambedkar Nagar, Cheda Nagar and Kamraj Nagar), Sion Panvel Road at Chembur Naka,JVLR near Powai," Mumbai Police tweets. Adds, "Commuters are advised to avoid these roads for the moment. Request you to take LBS Road as an alternate where traffic is moving though slow"

"Very less auto-rickshaws and buses on roads today. This is troublesome for the entire state, particularly people who have to go to offices" says commuter waiting for transport at Thane's Vartak Nagar

#Maharashtra: People seen waiting near Thane's Vartak Nagar due to less auto-rickshaws and other transport in the state today #BhimaKoregaonViolence pic.twitter.com/ttc3NpMcIt

Mumbai Dabbawallas Association decide to not run its delivery service, today; head of the association Subhash Talekar says "means of transportation difficult for delivery of tiffins on time during #MaharashtraBandh" #BhimaKoregaonViolence pic.twitter.com/6TiVFH2hD0

"Few protestors tried to disrupt Railway services at Thane but were immediately cleared by RPF and GRP officials. Services are running uninterrupted on Central Railway as of now" says CPRO of Central Railways

"Can't risk students' safety and security," says Garg. He adds that a second decision will be taken at 11 am to see if the buses can ply in the second half, "depending on the situation".

Several towns and cities in Maharashtra were on edge Wednesday as Dalit protests against Monday's violence in Pune spilled over to the capital Mumbai, with agitators damaging scores of buses, and disrupting road and rail traffic, officials said.

Clashes between Dalit groups and supporters of right-wing Hindu organisations during the 200th anniversary celebrations of the Bhima-Koregaon battle in Pune district had left a man dead on Monday.

In Pune, cases were registered by the Pimpri police against Milind Ekbote and Sambhaji Bhide, who head the Hindu Ekta Aghadi and Shivraj Pratishthan respectively, for allegedly inciting the violence. The two organisations had opposed the celebration of "British victory" in the battle.

Over 160 buses were damaged in Mumbai on Tuesday by rampaging protesters over 100 of whom were detained, police said.

Chief Minister Devendra Fadnavis ordered a judicial inquiry by a sitting judge of the Bombay High Court into the Pune violence, and appealed for calm. He said it needed to be ascertained if there was a conspiracy behind Monday's violence.

Fadnavis said a Rs 10 lakh compensation would be given to kin of the youth killed and his death would be probed by the CID.

Prakash Ambedkar, the Bharipa Bahujan Mahasangh leader and grandson of B R Ambedkar, has called a 'Maharashtra bandh' tommorrow to protest against the government's "failure" to stop the violence.

Meanwhile, Home Minister Rajnath Singh spoke to Fadnavis by phone from New Delhi to take stock of the situation.

Singh was told that everything was under control and all possible efforts are being made to restore normalcy, sources in the home ministry told PTI.

Dalit groups were celebrating the bicetenary of the Bhima-Koregaon battle which the forces of the British East India Company had won over those belonging to the Peshwa.

Dalit leaders commemorate the British victory, as it is believed that soldiers from the Mahar community - then considered untouchable - were part of the East India Company's forces. The Peshwas were Brahmins, and the victory was seen as a symbol of assertiveness by Dalits.

Congress president Rahul Gandhi called the event to celebrate the Bhima-Koregaon battle as a "potent symbol" of resistance to RSS-BJP's "fascist vision".

"A central pillar of the RSS/BJP?s fascist vision for India is that Dalits should remain at the bottom of Indian society. Una, Rohith Vemula and now Bhima-Koregaon are potent symbols of the resistance," he tweeted.

In Mumbai, protesters disrupted road traffic in the suburbs and local train services on the Harbour Line. They blocked roads in several areas, forced shops to shut down, and also attacked a journalist of a television news channel.

Hundreds of protesters gathered in Priyadarshini, Kurla, Sidharth Colony and Amar Mahal areas on the Eastern Express Highway, took out processions and raised slogans against the government and the administration.

Heavy security was deployed in the eastern suburbs of Mumbai.

The Mumbai police, meanwhile, issued a statement appealing to people not to believe in rumours and verify facts with the police before posting anything on social media.

Maharashtra minister of state for home Deepak Kesarkar today visited Bhima-Koregoan and neighbouring villages and said the situation was under control.

NCP chief Sharad Pawar blamed the administration for yesterday's violence and demanded a probe into the incident.

Appealing for peace, Pawar said such situations need to be defused patiently by those in political and social spheres without any provocative speeches being made.

"Since the administration did not take precautions, rumours and misunderstanding spread. A youth in Nanded died unfortunately. People from political and social field should defuse the situation harmoniously and patiently without making provocative speeches," the former Union minister said.

Maharashtra Congress chief Ashok Chavan condemned the violence and urged people not to believe in rumours.

Antisocial elements were trying to create tensions between Dalits and Maratha communities for political benefit, he said.

Leader of Opposition in the Maharashtra Legislative Council Dhananjay Munde said the violence was unfortunate and condemnable.

AAP spokesperson Preeti Sharma Menon said the Fadnavis government failed to keep peace. "The attack has resulted in unrest across the state between upper caste Hindus and Dalits," she said.