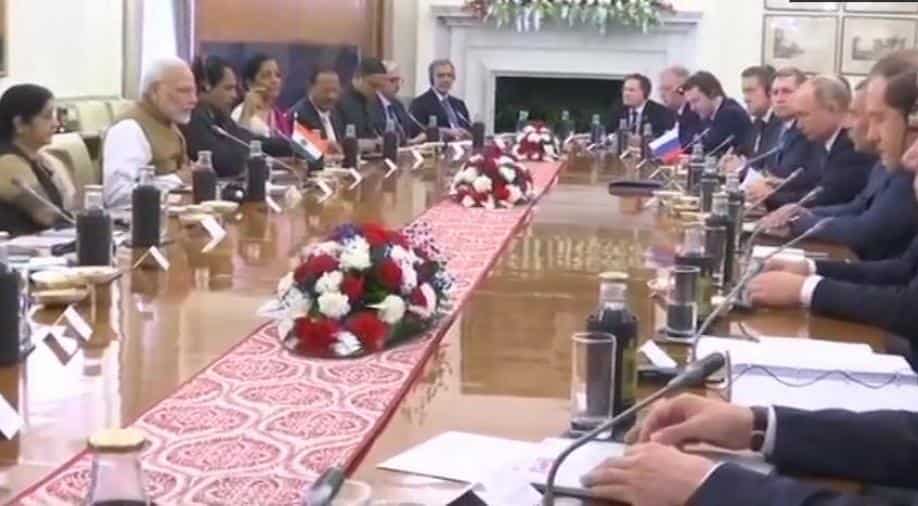 President Putin and PM Modi interacted with entrepreneurs at the India-Russia investor summit underlying the need for economic cooperation between the two old allies.

"Trade is a primary area of cooperation," President Putin said while addressing the "Invest India" summit.

"We have long standing ties," the Russian president added.

PM Modi said teachers and mothers play a key role in a young person's life as he interacted with Indian and Russian students.

"Scientists have contributed greatly to improving humanity, science is the most interesting field," President Putin added.

"Education is an issue of common interest,"President Putin told the young audience, while adding that his country was was working to improve education.

After delivering the joint statement, PM Modi and President Putin interacted with school students as they posed questions to the two leaders.

"India gives priority to its relations with Russia. Russia has always been a part of India's growth story," PM Modi said while delivering the joint statement.

Just hours after signing the S-400 missile defence deal, President Putin and PM Modi got together at Hyderabad House in New Delhi to issue a joint statement outlining partnership between the two countries over the long term.

President Putin while issuing the joing statement said the deals signed today will broaden partnership between the two countries.

"We understand India's energy needs," the Russian president said, adding that India and Russia share a deep relationship. "We are partners in achieving peace," Putin said.

Modi said that he had a quality discussion with the Russian president.

Putin is scheduled to arrive at the ITC Maurya Hotel at 3:30 pm, where the Indo-Russian Business Summit is scheduled to take place. He will also interact with a group of children later in the day. He will then head towards the Rashtrapati Bhawan to meet his Indian counterpart President Ram Nath Kovind.

The two countries are expected sign a deal worth more than $5 billion on the delivery of Russian S-400 anti-aircraft missiles following talks between Putin and Modi, according to Reuters.

More than 80 percent of India's military equipment was of Soviet origin during the days of the Cold War, but since its breakup New Delhi has diversified its weaponry, the report added.

A relationship radiating warmth and affection!

An exchange of agreements and press statements are scheduled for 2:30pm.

The spotlight will be on the S-400 missile defence system deal as, if signed, it could violate US sanctions under the Countering America's Adversaries Through Sanctions Act (CAATSA) instituted by the US Congress on arms purchases from Russia.

#WATCH: Russian President #VladimirPutin meets Prime Minister Narendra Modi in Delhi. He is on a two-day visit to India. pic.twitter.com/HlvfOGsEcQ

Russian President Putin met PM Modi with a customary hug ahead of the India-Russia joint statement.

President Vladimir Putin arrived in India today on a two-day visit to as India and Russia seek to cement their relations amid complex regional moves in the Asian region.

President Putin will be signing 20 bilateral agreements with India during his visit including in trade, tourism, energy and space exploration. However, it is the acquisition of the high tech S-400 missile defence missile system which will be the focus of attention during his visit to India. The US already expressed its displeasure at India signing the defence deal with Putin, threatening to impose sanctions under CAATSA.

During his visit, Putin will be meeting President Kovind and hold other official engagements to boost India-Russia ties. US and Russia have been taking potshots at each other for several months now with the Trump administration blowing hot and cold with Putin.

The US had expelled 60 Russian diplomats alleging that they were spies and closed Russia’s consulate in Seattle, siding with the UK over the poisoning of ex-Russian spy Skripal and his daughter. India, on the other hand, has been able to keep its hand on US handle, however, with the imminent signing of the S-400 deal things could change rapidly.

PM Modi had last engaged with the Russian president during the "informal" Sochi summit in May. Modi's boat ride with Putin in the Black Sea had attracted world attention at the time. All eyes with be on PM Modi and President Putin as they engage with each other in New Delhi over the next two days.