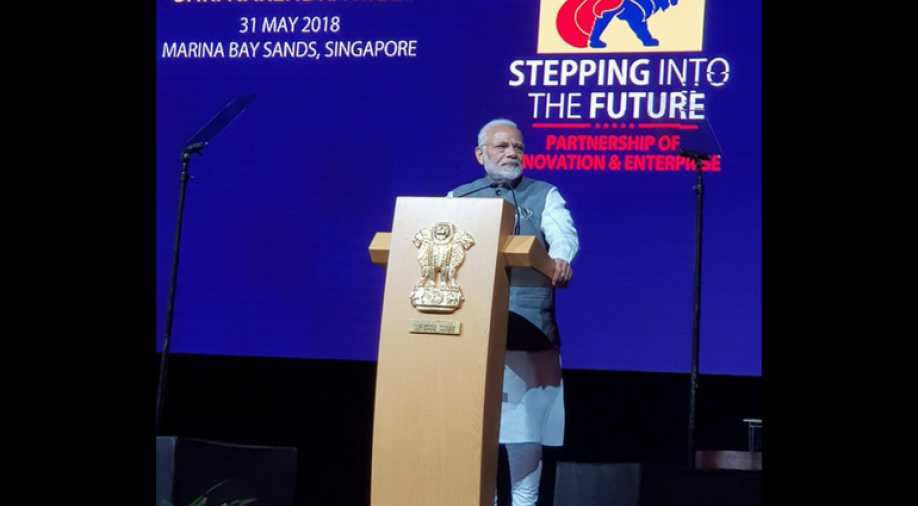 Prime Minister Modi is currently on a three-nation tour to Indonesia, Malaysia and Singapore. This is PM Modi's third and final leg of his three-nation visit.

Prime Minister Modi is currently on a three-nation tour to Indonesia, Malaysia and Singapore. This is PM Modi's third and final leg of his three-nation visit.

Prime Minister Narendra Modi arrived in Singapore on Thursday afternoon for the three-day visit. This visit is said to be crucial for the Act East Policy. Prime Minister Modi will be residing at Hotel Fullerton.

Prime Minister Modi is currently on a three-nation tour to Indonesia, Malaysia and Singapore. The aim of the visit is to enhance India's relations and engagements with all the three countries, which forms ASEAN.

This is PM Modi's third and final leg of his three-nation visit. Apart from meeting the top leadership of Singapore, he would also deliver the keynote address at the 18th Shangri-La Dialogue.

He will then pay a visit to India-Singapore Enterprise and Innovation Exhibitions at the Marina Bay Sands Convention Centre.

PM @narendramodi arrives in Singapore on an official bilateral visit on the third and final leg of his three-nation visit. Apart from meeting the top leadership of Singapore, he would also deliver the keynote address at the 18th Shangri-La Dialogue. pic.twitter.com/LWeVIbfdk1

Prime Minister Narendra Modi arrived in Singapore and was welcomed by the Indian community with full enthusiasm and warmth.

The Indian community accorded a warm welcome to PM @narendramodi in Singapore. The Prime Minister would be joining a wide range of programmes during his Singapore visit. pic.twitter.com/KHz656LWj2

PM Modi is visiting the India-Singapore Enterprise and Innovation exhibitions at the Marina Bay Sands Convention Centre today which will address topics related to social impact - how can they work towards making changes in health, education, water and agriculture.

The exhibition is put up jointly by Indian and Singaporean companies.

New models of mobile phones and other electronic gadgets were introduced at the place as Prime Minister Modi went to discuss each of their features. Further, the Indonesian professionals demonstrated new techniques revolving around the use of electricity.

RuPay on a global platform

One of the main events today will include the launch of mutually acceptable digital wallets between Indian and Singaporean citizens.

PM Modi will be carrying out a transaction using his RuPay wallet which will then be followed by a formal handshake between the National Payments Corporation of India (NPCI) and Singapore’s equivalent system, Network for Electronic Transfers or Nets. This will be formalised during a business event today at the Marina Bay Sands Convention Centre, where Modi, together with Prime Minister Lee Hsien Loong, will tour an exhibition of local and Indian start-ups in areas such as artificial intelligence, fintech and cyber security.

Once the handshake between NPCI and Nets happen, Indians with RuPay card can do any transaction in any shop or merchant establishment in the island nation.

Experience Anushasanam, a dance and yoga performance that depicts the benefits of practicing the ancient art of Yoga for awakening energies that lie in the 7 Chakras of the human body #CulturalPartners #IndiaSing18 #MODISG2018 pic.twitter.com/QOiJkxSgrQ

Prime Minister began addressing the audience at the Marina Bay Centre and hailed the business community.

He added that the Indian diaspora in Singapore represents the diversity of India and appreciated the fine Indian culture of the city.

"In their journey through Singapore, thinkers like Swami Vivekanad and poets like Rabindranath Tagore found the connect that connected India to the East. Subhas Chandra Bose gave the 'Dilli Chalo' call from the soil of Singapore," he added.

The success of Singapore lies in its multi-cultural society: PM Narendra Modi at a Business and Community Event at Marina Bay Sands Convention Centre in #Singapore pic.twitter.com/sBJnuJqMRN

Relations between India and Singapore are among the warmest and closest, says PM Modi.

Relations between India & Singapore are among the warmest & closest: PM pic.twitter.com/ZTaDg2tLRz

PM Modi gives weight to Economics as the heartbeat of India-Singapore relationship. India is the third largest source of tourists for Singapore, PM Modi stated.

"Singapore is both a leading investment source and destination for India and is the first country with which we signed a comprehensive agreement," Modi said.

Smart cities, urban solutions, skill development, port, aviation and industrial parts - India and Singapore and contributing for each other's development. "Even at the period of deep structural reforms such as the introduction of GST India has witnessed good growth. Economic reforms are taking place in speed and scale not know so far in the country," Modi said.

PM Modi hailed India's growth and economy and talked about the current and upcoming developments.

In India, the present situation is changing rapidly. The change is coming at a speed, which was not known so far. A new India is taking shape: PM Narendra Modi in #Singapore. pic.twitter.com/Dcq5Wx5N0Z

"We have the digital identity for almost everyone, a mobile phone and bank account for nearly everyone. Governance and public service are changing, there is delivery of benefits for poor, banking services are within their reach," Modi said.