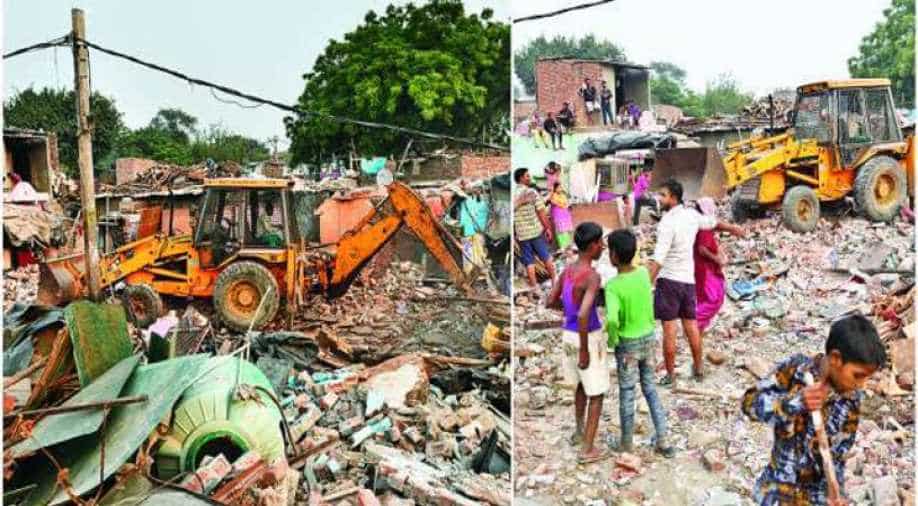 DDA destroys over 400 jhuggis in Kathputli colony amid stone-pelting from the residents. Photograph:( Zee News Network )

On October 31, the residents of Kathputli Colony had alleged that they were beaten by the police during the DDA's demolition drive and not allowed to take their belongings before their houses were razed.

Chief Minister Arvind Kejriwal met the residents of Kathputli colony in west Delhi today and asked officers to provide basic facilities such as food and tents to those affected by a recent demolition drive.

During his visit, the chief minister, flanked by Revenue Minister Kailash Gahlot, criticised the Delhi Development Authority (DDA) over its demolition drive at the colony earlier this week.

"When the AAP government was formed, we introduced a policy under which no jhuggi would be demolished until the affected people were rehabilitated. People's houses have been brutally demolished. Young girls are on the streets. One child has died," Kejriwal said.

Addressing a gathering, he said it was not correct to engage police during a demolition drive.

"I am told that there is a high court order according to which houses cannot be demolished in this colony till November 16 and despite this, the demolition drive was launched," the chief minister said.

Later in the day, Kejriwal also met Lt Governor Anil Baijal over the issue and requested him to provide all basis facilities and the latter agreed to it.

"Tents, water, food, toilets, etc. would be provided to the residents of the colony by the Delhi government as soon as possible. Orders have been passed to the officers concerned for the same," a government official said.

In a statement, the DDA claimed the chief minister "appreciated" the work being carried out by it as per the orders of the high court.

On October 31, the residents of Kathputli Colony had alleged that they were beaten by the police during the DDA's demolition drive and not allowed to take their belongings before their houses were razed.

The drive had triggered clashes among its residents, activists and the police.