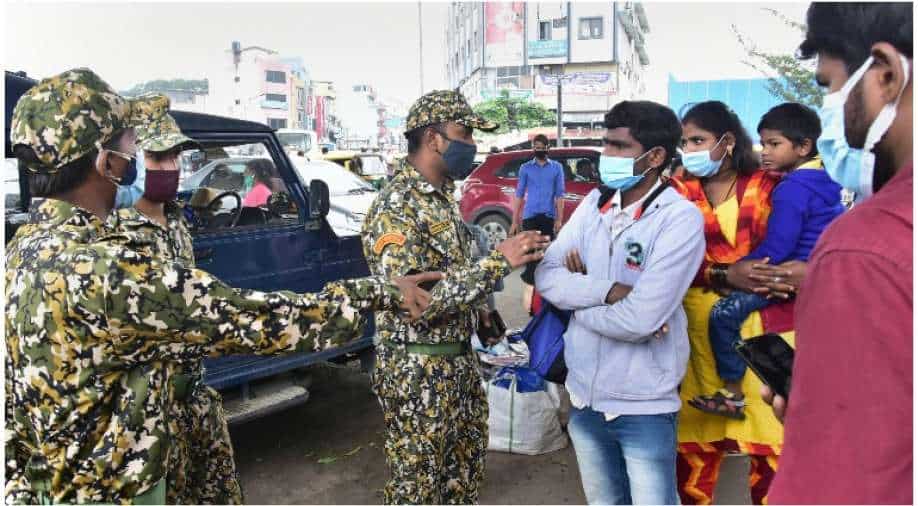 A BBMP marshal asks citizens to wear mask at a crowded market in Bengaluru, Sunday, Nov. 28, 2021. The Karnataka government has decided to intensify surveillance and increase the RT-PCR Covid tests at the bus stands and railway stations following reports of new COVID-19 variant Omicron Photograph:( PTI )

Karnataka government took stringent precautionary measures in border districts of the state to curb the spread of the COVID-19 pandemic, informed the Chief Minister Office on Sunday.

Speaking to media persons today, Bommai said, "An increase in COVID-19 cases had been noticed among the paramedical staff and students who arrived from Kerala. So, stringent precautions were being taken in Dakshina Kannada, Madikeri, Chamarajanagar and Mysuru districts bordering Kerala."

"Those arriving from Kerala would be allowed only with RTPCR negative report. It is also mandatory for them to have a double dose of vaccination before entering Karnataka," the Chief Minister said.

Referring to the fear of the new COVID-19 variant `Omicron`, Bommai said, "the new variant has been reported in South Africa, Hongkong and Botswana. WHO has also issued an alert about the new strain of the virus."

He further said that Prime Minister Narendra Modi has also issued guidelines to prevent and control the new variant, however, no cases of the new strain have been reported in Karnataka.

Speaking about the spike in Covid cases reported in student hostels in Dharwad, Mysuru and Bengaluru districts, Bommai said that these hostels and colleges had been declared as containment zones and students along with doctors and nurses were being subjected to the Covid test.

"We have requested the Union Government to ban the arrival of passengers from the three countries which have reported the new strain," Bommai added.

"The state government had made double dose of vaccination compulsory for those working in government offices, malls, cinema halls and other public places. Testing has been intensified in border districts, students who have arrived in the last 16 days from Kerala would be tested again seven days after they get a negative report," Bommai added.

Meanwhile, the state Chief Minister said that a suitable decision would be taken on guidelines for New Year celebrations in the next few days depending on the situation.

"Instructions had been issued to follow covid guidelines in the campaign meetings of Legislative Council election. The state has 80 lakh doses of the vaccine and about 91 per cent of the eligible population has been covered for the first dose, a target of 70 per cent for the second dose by December end has been set," he added.