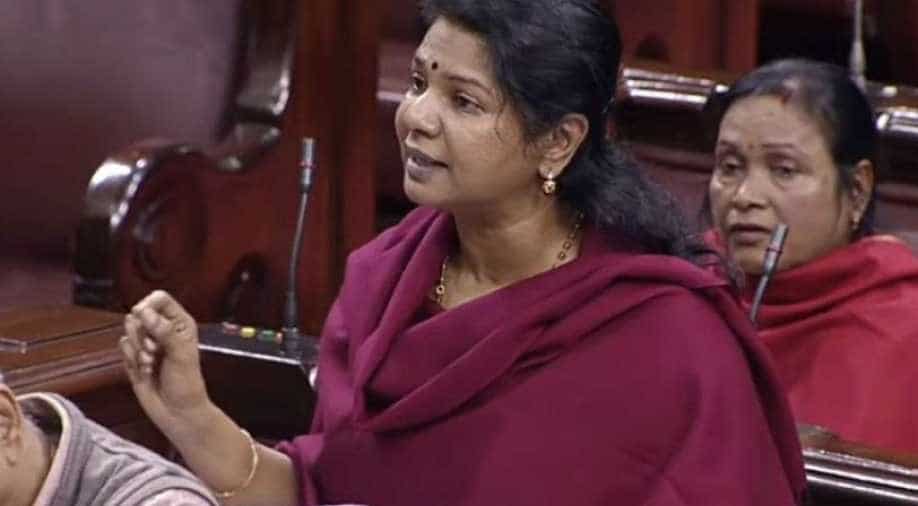 DMK Lok Sabha MP Kanimozhi was hospitalised on April 3 after she tested Covid-19 positive. She had campaigned in southern Tamil Nadu for DMK candidates in Tirunelveli and Tenkasi. Photograph:( DNA )

Meanwhile, the Madras High Court earlier in the day dismissed a plea to prevent DMK's candidates Kanimozhi and Kathir Anand from fighting the Lok Sabha polls for allegedly violating the Model Code Conduct.

The Income Tax department on Tuesday carried out raids at a house where DMK candidate Kanimozhi is staying in Tamil Nadu's Thoothukudi.

Official sources indicated that the searches were held following "some inputs," but they did not elaborate. Income Tax officials were also "assisting," the local poll officials, they told PTI. The outcome of the searches were not known immediately.

"Crores and crores of rupees are kept in Tamilisai Soundararajan's (BJP TN chief) residence, why no raids there? Modi is using IT, CBI, judiciary and now EC to interfere in elections. They are doing this as they fear losing," Stalin told media today.

Meanwhile, the Madras High Court earlier in the day dismissed a plea to prevent DMK's candidates Kanimozhi and Kathir Anand from fighting the Lok Sabha polls for allegedly violating the Model Code Conduct.

A bench of justices S Manikumar and Subramonium Prasad dismissed the plea after the Election Commission told the court that the two have been booked for allegedly resorting to electoral malpractices, news agency PTI reported.

MK Stalin on IT raids on Kanimozhi: Crores and crores of rupees are kept in Tamilisai Soundararajan's(BJP TN Chief) residence, why no raids there? Modi is using IT,CBI,Judiciary and now EC to interfere in elections.They are doing this as they fear losing pic.twitter.com/31Q7Lalf5M

As the plea came up for hearing before the bench, the poll panel counsel Niranjan Rajagopalan told the judges that FIRs have been filed against both the candidates on complaints of violation of the code.

Tamil Nadu is set to go to general polls this Thursday.

Kanimozhi is the DMK candidate from Tuticorin, while Anand was set to contest from Vellore. However, the Election Commission has cancelled Lok Sabha polls in Vellore citing seizure of huge cash from an associate of a DMK leader recently.

Petitioner V Abdullah Sait of Ramanathapuram had urged the court to direct the EC to initiate action against Kanimozhi and Anand. He had also sought the court's directive to the poll panel to bar the duo from contesting the polls.

Sait alleged in his petition that Kanimozhi had been 'clandestinely' distributing cash to voters during campaigning and police have booked a case against DMK members in this regard.