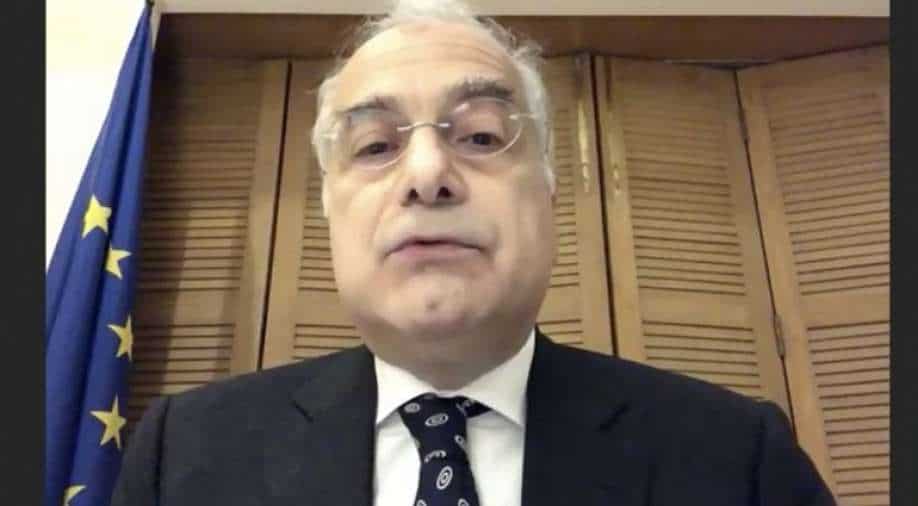 The two-day visit on Wednesday and Thursday saw 24 foreign heads of the mission visiting the union territory of Jammu and Kashmir. The envoys visited Srinagar, Budgam, and Jammu

European Union envoy to India Ugo Astuto has termed his visit to union territory of Jammu and Kashmir an 'opportunity' to see the 'situation on the ground' and during his interaction taken note of the recent district development council (DDC) elections and resumption of the 4G high-speed internet.

EU envoy speaking to WION said, "In our interaction, we have taken note of recent steps taken, such as the election of the district development council, the resumption of 4G internet services. It is very important obviously, right to freedom of expression online and offline is a key-value for all democracies."

Adding, "We have also noted with great expectations as to other important steps to be taken in the political and economic sphere including the early organization of legislative assembly elections. Overall, the visit presented the opportunity to see the situation on the ground and interact with some local interlocutors as part of the European Union's outreach to all stakeholders and we definitely look forward to continuing our dialogue with our Indian interlocutor."

The two-day visit on Wednesday and Thursday saw 24 foreign heads of the mission visiting the union territory of Jammu and Kashmir. The envoys visited Srinagar, Budgam, and Jammu. The programme included meeting with the military and the civil authorities, including elected representative. During the Srinagar visit, the envoys met elected representatives of urban local bodies, DDC and block development councils from all districts of the Kashmir division. The group also visited the famous Hazratbal shrine, one of the holiest mosques in the union territory.

The biggest percentage of envoys in the present group came from Europe. These were the EU, Finland, France, Italy, Ireland, Netherlands, Portugal, Spain, and Sweden. This is the third such visit of foreign envoys, with two batches visiting the Union territory last year in January and February. EU envoy was present in previous such visits as well.