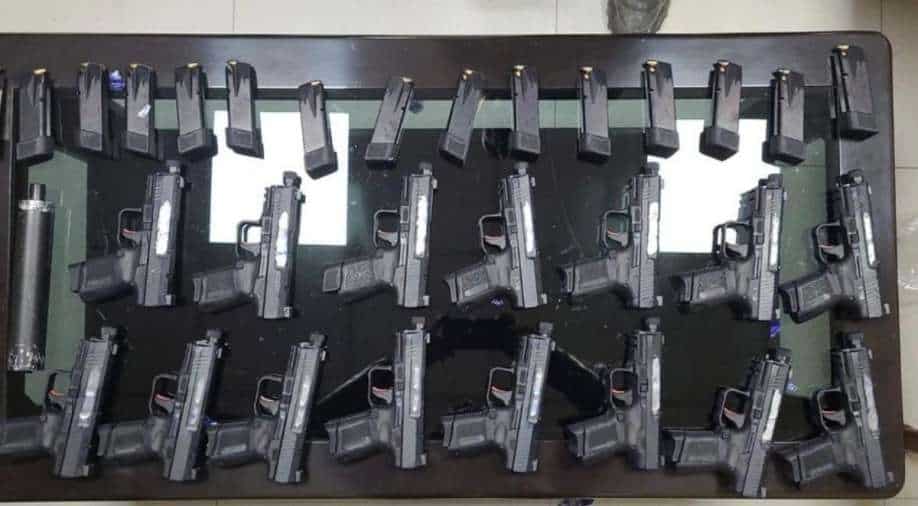 15 pistols, 30 magazines, 300 rounds along with one silencer have been recovered. Photograph:( Twitter )

"This particular module had been tasked with identifying and attacking PRIs and other civilians and soft targets for which pistols and ammunition had been provided to the following apprehended hybrid terrorists: 1. Noor Mohammad Yatoo S/O Gh Hassan Yatoo. 2. Mohd Rafiq Parray S/O Mohd Akbar Parray 3. Ashiq Hussain Parray S/O Ab Rahman Parray, all residents of Goshbugh, Pattan.The three terrorists divulged the plot which was directed by LeT terrorists Yusuf Kantru and Hilal Sheikh (both killed at Malwah op) and executed by recently infiltrated terrorists Gulzar Ganale (killed in an encounter at Bandipora) and Umar Lone of Wussan (still active and at large), "said Rayees Bhat, SSP Baramulla.

The sources in security agencies have revealed that there is an alert issued in Srinagar as forces believe that there could be an attack using sticky IED on the forces. Security has been beefed up across.