Jaishankar-Pompeo discuss trade at their fourth meeting in four months 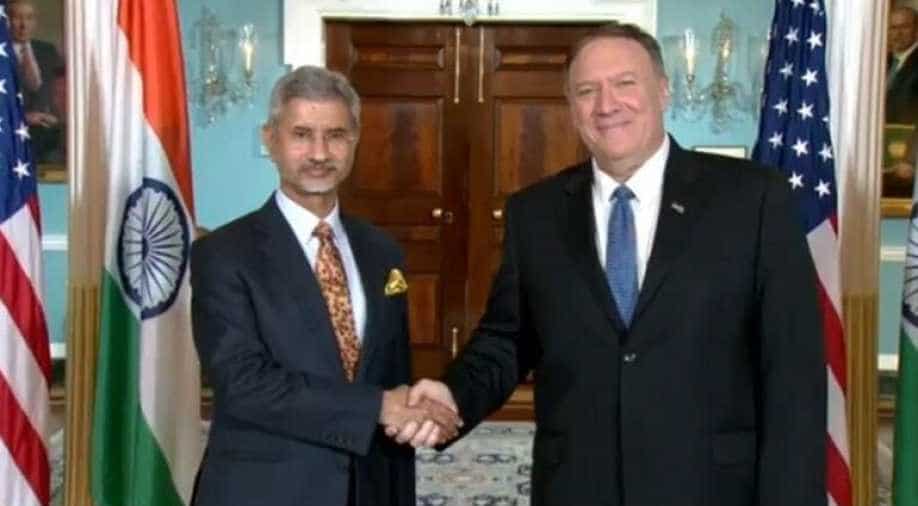 Jaishankar is in Washington after his New York visit during which he met more than 40 of his counterparts.

This was the fourth meeting between Jaishankar and Pompeo in the last four months. They first met during Pompeo's Delhi visit, followed by a dialogue during Association of Southeast Asian Nations (ASEAN) Foreign Ministers' meeting in Bangkok, then again last week at the first-ever Quad Foreign Ministers Meeting in New York and now in Washington.

The Indo-Pacific region, counter-terrorism, trade, and Afghanistan remained the key issues during the meeting.

Jaishankar is in Washington after his New York visit during which he met more than 40 of his counterparts.

EAM in a tweet said that he had a "good conversation" with US Secretary of State on how to "further progress of our bilateral relations. "

He tweeted," discussed important regional and global issues. Welcomed the continuing development of a key partnership."

A good conversation with @SecPompeo focusing on the further progress of our bilateral relations. Also discussed important regional and global issues. Welcomed the continuing development of a key partnership. pic.twitter.com/cckktoXt1X

The meet also comes two days after PM Modi concluded his week-long high profile US visit. The visit, many believe, helped bring US and India closer.

Both US President Donald Trump and PM Modi endorsed each other during the Indian diaspora event ''Howdy Modi" in Houston that saw the participation of 50,000 people, mostly Indian Americans.

Trump meanwhile, called PM Modi "one of Americas most devoted and most loyal friends" who is "doing a truly exceptional job for India and all of the Indian people".

"Thousands in Mumbai will watch the first-ever NBA game in India... am I invited, Mr Prime Minister? I may come, be careful I may come", Trump said.