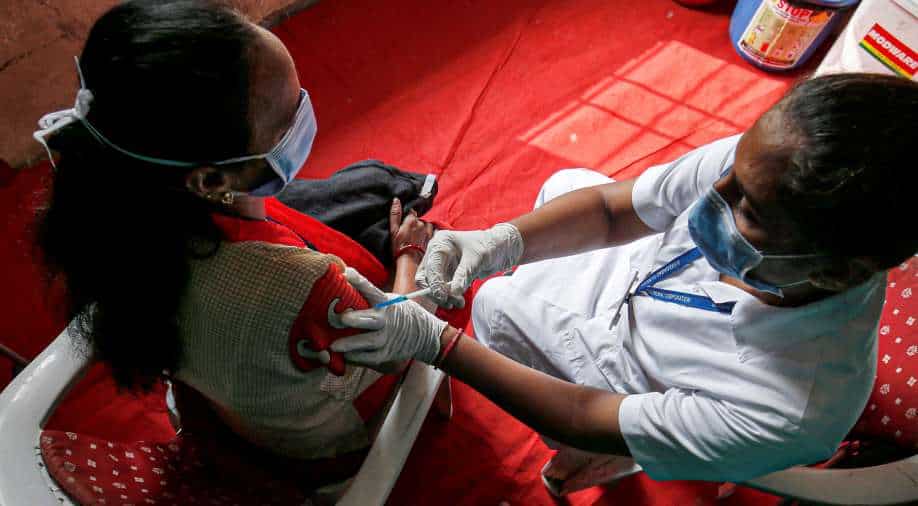 People in the age group of 60 years and above, who have co-morbidities, do not need to produce or submit any certificate from doctor at the time of taking precaution dose of COVID-19 vaccine (representative image). Photograph:( PTI )

The last time India reported more than 18,000 single-day cases was in the latter half of January

India on Monday reported 18,599 new coronavirus cases, the third consecutive day the single-day tally remained over the 18,000 mark, pushing the overall total to 1,12,29,398, according to data shared by the Union Health Ministry.

Meanwhile, 97 fatalities were reported in the last 24 hours, which increased the death toll to 1,57,853. The last time India reported more than 18,000 single-day cases was in the latter half of January.

On Sunday, 18,711 new cases were reported, while 18,327 infections were registered a day earlier. However, the active cases are on a gradual increase, becoming a cause of worry.

The recovery rate has reduced by over 1.07 per cent in the last two days. It now stands at 96.91 against 97.98 per cent recorded on Saturday.

The drop in recovery rate and the increase in new and corresponding active cases have been attributed to various factors, including the continued spike in infections in Maharashtra and the sudden spurt in Punjab.

Over 90,000 cases are active in Maharashtra, according to the Union Health Ministry. Just within a week (February 28-March 5), the state had added 51,612 new cases.
In view of this, the Central government had rushed high level multi-disciplinary public health teams to Maharashtra and Punjab on Saturday.

Experts have expressed a number of possibilities that could be owed to the surge, ranging from the lax attitude of people towards following the Covid protocols to likeability of "mutations and new strains".

The Ministry also informed that 5,37,764 samples were tested on Sunday.

The cumulative tests done by Indian Council of Medical Research (ICMR) so far stands at 22,19,68,271.

To date, 2,09,89,010 doses of the Covid-19 vaccine have been administered in the country since the mass drive began on January 16.

The third phase of vaccination began on Monday covering 27 crores of people above 60 and those above 45 years of age with comorbidities at 10,000 government and over 20,000 private vaccination centres.