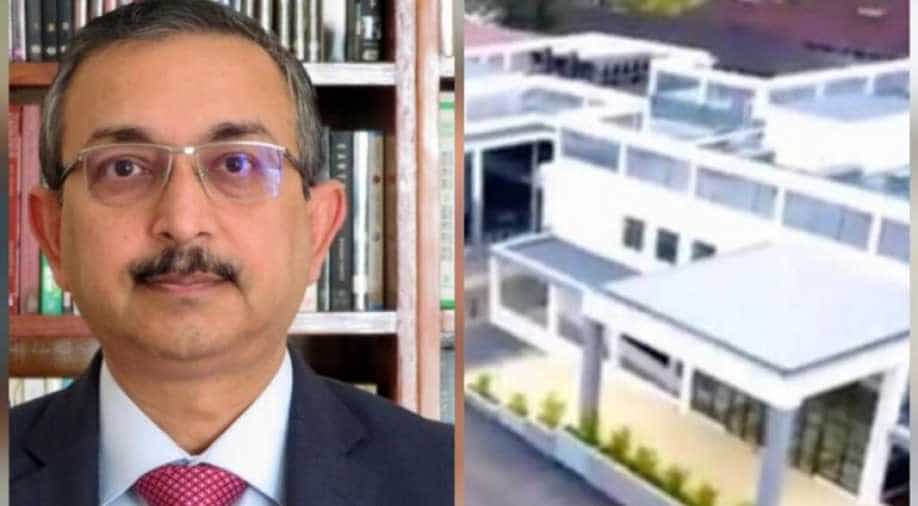 An India built a state-of-the-art energy-efficient hospital in Mauritius, which was opened by Indian PM Modi and PM of Mauritius Pravind Jugnauth last year on October 3rd is being used to deal with the COVID crisis

An India built a state-of-the-art energy-efficient hospital in Mauritius, which was opened by Indian PM Modi and PM of Mauritius Pravind Jugnauth last year on October 3rd is being used to deal with the COVID crisis, Indian envoy to the country has told WION. Speaking exclusively to our principal diplomatic correspondent Sidhant Sibal, India's High Commissioner to Mauritius Tanmaya Lal while talking about the COVID situation in the country lauded the "leadership of the country is taking commendable steps on various fronts to contain the pandemic" and thanked them for "testing and other procedures required" of several Indian workers after one Indian worker was confirmed COVID positive case. He also talked about the ongoing repatriation process for which the mission is currently getting ready and expects around 1000 Indians who may want to return. Remember Mauritius was one of the first countries to which India sent Hydroxychloroquine.

WION: How are India and Mauritius cooperating on Covid? We sent them HCQ.

Tanmaya Lal: Well, as you are aware, India and Mauritius share a very special relationship. As part of our close ties, there is a longstanding partnership between our countries on the issue of public healthcare. On the Covid pandemic also we are engaging very closely. Mauritius was one of the first partner countries where India was able to bring medicines. Government of Mauritius had made an early request for Hydroxychloroquine and some other medicines. The first consignment of around 13 tons of medicines from India arrived in Mauritius on 15 April. This included half a million tablets of Hydroxychloroquine. This was greatly appreciated here. Hon. Vice Prime Minister Mrs Dookun received the consignment at the airport. Warm messages were exchanged between our Prime Ministers on this. The gesture was well-liked by people, healthcare specialists and received wide media attention. We are working to bring the next consignment of essential medicines in the coming days. This will also include Ayurvedic medicines that have been requested by the Government of Mauritius. You may know that last October Prime Minister Pravind Jugnauth and Prime Minister Modi had jointly e-inaugurated a new state-of-the-art Hospital in Mauritius as part of our development partnership. The Hospital is currently being extensively used in the context of Coronavirus situation. There are many other ongoing and earlier instances of our partnership in the healthcare sector including in Ayush and traditional medicines fields. In February this year, two senior experts from Mauritius participated in an International Ayush Conference in India. On Monday both India and Mauritius participated in the online meeting of the Contact Group of Non-Aligned Movement on Covid 19. I must point out that the Government of Mauritius has been extremely supportive in helping us take care of the Indian nationals here. Their senior leadership has reassured us of their attention to any facilitation required. They assisted with testing and other procedures required in cases of the large number of Indian workers, which became necessary after one Indian worker was confirmed as a Covid positive case. We are grateful for their help.

WION: How has the Indian mission reached out to stranded Indians in the country?

Tanmaya Lal: There are around 10,000 Indian nationals in Mauritius. We estimate that around 1,000 of these may need to return to India. These mainly include hotel interns, students, tourists, workers and other professionals. The High Commission has been proactive in reaching out to the Indian nationals here. We are in regular touch with colleges where these students are studying; hotels where interns were working and their agents; and companies where Indian workers are deployed. My colleagues have reached out personally to hundreds of Indians in Mauritius and are also in touch with many of the parents in India and landlords where interns, students and tourists are staying to facilitate their welfare. We have facilitated the issue of various permits and special passes, transport, and medicines during the curfew. We are operating three helplines that are operational 24x7. We are very active in our messaging on social media including Twitter, Facebook and Website. I also reach out through regular video messages. In the initial days of the lockdown and curfew, when supermarkets had been closed down, the Mission worked hard to procure essential groceries and my colleagues went out to distribute these for a large number of those who were facing serious problems. My colleagues also visited colleges and institutions where a large number of Indian students are studying to ascertain the conditions including the food arrangements.

WION: How has the ground situation in Mauritius changed?

Tanmaya Lal: Mauritius is a small remote island but its population density is among the highest in the world. Their economy, especially the tourism sector, and supplies are to a very large extent dependent on the external environment. Despite such concerns and limitations, the Government of Mauritius took strong measures at an early stage to stop international traffic and impose lockdown and then Curfew. The leadership of the country is taking commendable steps on various fronts to contain the pandemic, ensure essential supplies, and institute supportive measures for vulnerable sections and businesses. While the curfew remains extended until the end of this month, a carefully phased reopening is being planned. There are daily high-level briefings. Testing is going on. Mauritius is doing comparatively well in this regard according to the Africa Centre for Disease Control and Prevention. Quarantine measures are strictly imposed. The graph of infected cases appears to be flattening. Mass Testing has now commenced.

WION: Have we shared any Indian containment model and how are the Indian diplomats doing?

Tanmaya Lal: There is a lot of interest in the Mauritian leadership and public health experts in understanding the developments and best practices in India. I have personally shared many of the steps underway and containment plans in India with their leadership. At the same time, there is interest in the research being carried out in India especially on drugs and vaccine development and other affordable practical innovations on medical equipment. We are sharing these extensively on our social media platforms also. There is also serious interest in the use of Ayurveda for boosting immunity. I have shared Ayush guidelines with them. We are also regularly sharing these on social media. Mauritian experts are attending some of the technical webinars on managing Covid pandemic organized under our ITEC programme by Indian medical institutions, including by the All India Institute for Ayurveda. Our Culture Centre is conducting online Yoga classes, which also has a high resonance here. Let me thank you for asking about my colleagues. The pandemic and the curfew has also been a quick learning curve for all of us. While we are mostly working from home and engaging regularly through video conferencing, many of us also have to move out daily as part of our work. My colleagues have visited the Medical College before the Curfew and were present at the airport when the last commercial flight was departing to assist Indian students and tourists before the travel restrictions kicked in. They have also assisted a large number of Indians by going out to procure and distribute groceries when required despite the curfew and risks of infection. At the individual level, we continue to take precautions and our morale remains high. We are now engaged in preparing for arrangements for the Indians who need to return to India.