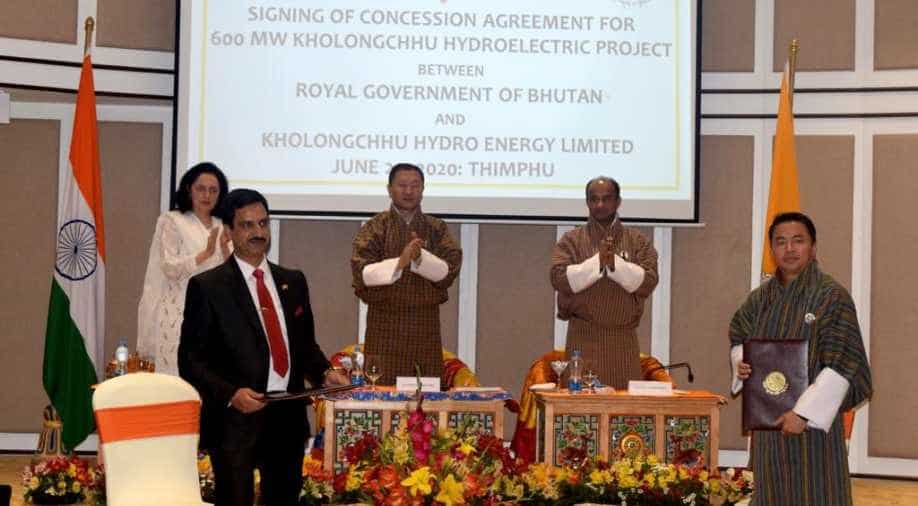 KHEL is the first Joint Venture company to be implemented under an Inter-Governmental Agreement (IGA) signed in 2014. Photograph:( WION )

Kholongchu is expected to generate about 2568.88 million units annually.

The project will be the first-ever Joint Venture project to be implemented in Bhutan. The partners of the project are India's Satluj Jal Vidyut Nigam Limited(SJVNL) and Druk Green Power Corporation Limited (DGPC).

Speaking at the signing ceremony via video conference, India's external affairs minister S Jaishankar said, "commencement of the construction activities of the Project will create economic and employment opportunities in Bhutan in this critical time."

KHEL will be the first Joint Venture company to be implemented under an Inter-Governmental Agreement (IGA) signed in 2014.

"Cooperation in the development of the hydropower sector in Bhutan is the centrepiece of the mutually beneficial economic cooperation between Bhutan and India. Hydropower projects are of paramount importance for both our countries as they will serve to further integrate our economies, bring further prosperity and enhance energy security for both the countries" Bhutan's foreign minister Tandi Dorji said.

On debt financing he called on the "JV partner from the Indian side would need to take the lead" and sought support and "intervention of the Government of India to ensure that the project secures access to the most viable financing at the earliest."

Kholongchu is expected to generate about 2568.88 million units annually.

Calling, Kholongchhu "continuation of our bilateral cooperation" Indian envoy to Bhutan Ruchira Kamboj highlighted previous such cooperation on hydro projects like Chukha, Kurichhu, Tala and Mangdechhu all of which "stand as proud examples...epitomising the core of this friendship: partnership for a greater good."

Adding, "With this 7th hydro project (Puna-I and Puna-II working in progress) we further the noble visions of both His Majesty and Prime Minister Modi as we develop even greater trust between our two countries."

India recently completed 720 MW Mangdechhu Hydro Electric Power Project and both sides are in process of expediting the completion of other ongoing projects including the1200MW Punatsangchhu-1 & 1020MW Punatsangchhu-2.

During PM Modi's visit to Bhutan in August 2019, he along with Bhutan's PM inaugurated the 720 MW Mangdechhu Hydroelectric Project.