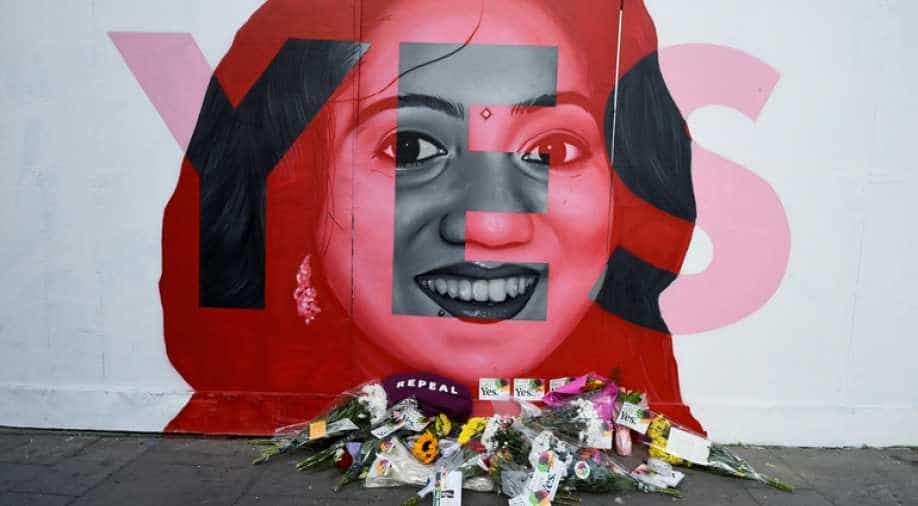 Flowers are left at the foot of a new mural of Savita Halappanavar put up on the day of the Abortion Referendum on liberalising abortion laws in Dublin, Ireland. Photograph:( Reuters )

Thousands of people in Ireland are celebrating after the country voted overwhelmingly to change the constitution so that abortion can be legalised.

According to exit polls, 69 per cent of voters voted to repeal the 35-year-old 8th amendment to Ireland's constitution, which had put in place some of the most restrictive abortion laws in the world.

This could be a stunning victory for the Yes side after a long and often divisive campaign.

It is an historic moment for a country long viewed as deeply religious and traditional.

And it is a moment brought about by the untimely and tragic death of a vivacious young Indian woman from Karnataka after she was denied an abortion six years ago caused widespread outrage across Ireland and revulsion at what many saw as the country's archaic abortion laws.

In 2012, 31-year-old Savita Halappanavar was living the dream. She was a successful dentist who lived with her husband Praveen in Galway, on the west coast of the Republic of Ireland - one of the most breathtakingly beautiful parts of the world. In October 2012, the four-month pregnant Kavita was admitted to the University Hospital in Galway with back pain.

She was released and readmitted the same day when doctors determined that she was miscarrying. Savita asked for an abortion, realising that her life was now in danger. The doctors, who Savita's husband says were fearful of the consequences of granting his wife's wishes, repeatedly refused the termination.

At one point, her husband claims, doctors told him: "You can't have an abortion, this is a Catholic country", as his wife begged for a termination.

A little over a week later, Savita was dead from severe sepsis. She had suffered a miscarriage four days after she had been admitted to hospital.

Her death caused widespread revulsion. Thousands of people took to the streets across the country and even prompted representatives of the Catholic church - which has long shaped public policy and attitudes in Ireland - to publicly state that the church did not believe the right of an unborn child was more important than a woman's right to life.

A subsequent government investigation revealed that the ambiguity which surrounds the 8th amendment to the constitution - which only allows for abortions in cases where the life of the mother is in extreme danger - was a "materially contributory factor" in Savita`s death.

Savita's beaming face has appeared widely on posters and banners for the "yes" campaign which called for the repealing of the 8th amendment.

Her father Andanappa Yalagi released a video calling on voters to "remember Savita" when they voted. And Ireland has today voted overwhelmingly for a radical and historical change, sparked by the martyrdom of a young Indian girl whose life was cruelly snatched away.