Home away from home: Little India in Indonesia 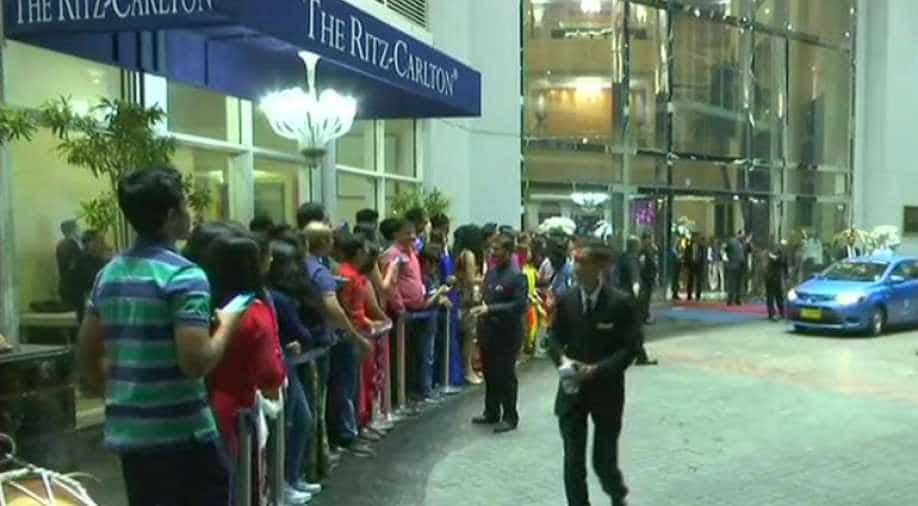 Members of the Indian community await PM Modi's arrival outside the The Ritz Carlton hotel in Jakarta. Photograph:( ANI )

He is happy to receive Indian Prime Minister Narendra Modi in Jakarta but rues a little when we talk about food. He cannot have his favourite food. Basmati rice and Indian tea is unavailable in most of the store rooms in Indonesia. There is plenty of local and tea and rice, but the Indian blend is missing. Some even miss the traditional bhujiya.

Fortunately, the expectation of the Indian community in Indonesia operates at the levels of comfort and aspiration and not fear and retribution.

“I don’t know why it has happened. Last year all these items were available,” said Ashish Sharma, an ardent Narendra Modi fan and general manager in a multi-national company. He came to India in 2012 and within 3 months he ended up with an ultimatum from his wife. She wanted him to leave his job and return to India. The reason was simple. Children were finding it difficult to adjust to the new educational system. He and his wife also found the Indian community scattered. Ashish admits that barring big towns, small towns do not sustain modern entertainment industries. But he persisted. His daughter was sent to Australia for education and Indonesia too did not treat him badly either. He survived and prospered at the same time.

Unlike countries like Myanmar, Indians are comfortable and prosperous in Indonesia. They have never faced persecution. Indians are primarily located in Jakarta, Eastern and Northern Sumatra and mostly engaged in textiles, export-import and plantation industries.

Shanti, daughter of a prosperous industrialist and now a media personality of her own says that Indians have always been welcomed in Indonesia. "It is a welcoming community. Courteous and polite. Though you will realise that you are an outsider, but it will not come in your way," she said. Many feel otherwise. Unlike Malaysia or Singapore, Indians are not represented in the corridors of power in Indonesia.

There are other concerns too. There is lot of emphasis on cultural connectivity between India and Indonesia in the context of Mahabharat, Ramayana, temples, Buddhist religious places and use of Sanskrit words in daily usage and names. But the real connectivity is non-existent. There is no direct Delhi-Jakarta flight as of today. There is no connection between Banda Aceh and Indira Point. This is when India played a crucial role in Indonesia’s freedom struggle and two of their leaders were flown out from Indonesia by JB Patnaik in a Dakota on behest of Sukarno. It was Nehru who dispatched these leaders to New York to plead their case of independence against the ruthless Dutch colonialists. It is here the Bandung Conference was organised in 1955 but all was lost by 1965.

Others issues are also pressing for Indians. Banal in the category when it comes to national engagement but important for an individual in daily course of life.

Medicine is very expensive in Indonesia. Both educational and medical facilities are also way too expensive. Many Indians want this deadlock to be resolved. Some say that a way should be devised that people of Indian origin get access to cheaper medicine. “Indonesian hospitals and doctors cannot be compared with superior Indian infrastructure. But India does not have visa on arrival for us as Indians get it in Indonesia,” says Poonam Sagar another Indian-Indonesian.

Leela Kothari, another Indian Indonesian, grumps and says that both governments must work actively to solve immediate issues of the community. “Superior and cheaper Indian medical facilities should be available to us,” says Kothari as the other options mean going to Singapore, Kuala Lumpur or Pengang.

Indians in Indonesia are also full of praise for the Indonesian industry. The Corporate Social Responsibility difference between Indian and Indonesian business practices can be felt. Amol Titus, an Indian business expat based in Jakarta says, "Corporate Social Responsibility works far better in Indonesia than India and it should be a learning curve for the Indian business.” He says that there are toilets made by industries for women taking government out of the curve.

There are other concerns also.

Many feel that India is becoming culturally individualistic and  aggressive which stands in contrast to Indonesia. The latter is more collaborative in nature. “In Indonesia, the collaborative attitude actually flows from Hindu-Buddhist tradition, but the fear is that two may collide one day because of Make in India campaign,” says Amol.

Life for an expat or person of an Indian origin is almost like a rhythm. “We follow every festival. We celebrate them together. Outside India, we are Indians first,” says Shanti. The religious festivals for Indians outside become cultural festivals, a glue which binds them over parochial difference of caste, language and religion. The other side, the majority too is religious and religious space is being contested between conservatives and people who want tolerant Islam.

But Indonesia too is not immune to the process of radicalisation which stems from the wastelands of West Asia. Though there is a silver lining.

Women are an integral part of the economy. They drive it. “This may work as a barrier to the rising tide of conservatism,” says Amol. The young Indian today do not wants to follow the traditional businesses of their forefathers. Most of them want to be part of the new economy like media and digital. They are looking out of the world which there parents built for them. The young India yearns for more in Indonesia. Prime Minister Modi knows it. He is the only leader after Jawaharlal Nehru to aggressively connect with the Indian diaspora audience. Nehru was sent by Gandhi to build consensus for freedom. Modi wants diaspora to be part of the Indian success story. It's time this intent is executed for people of Indian origin in Indonesia.