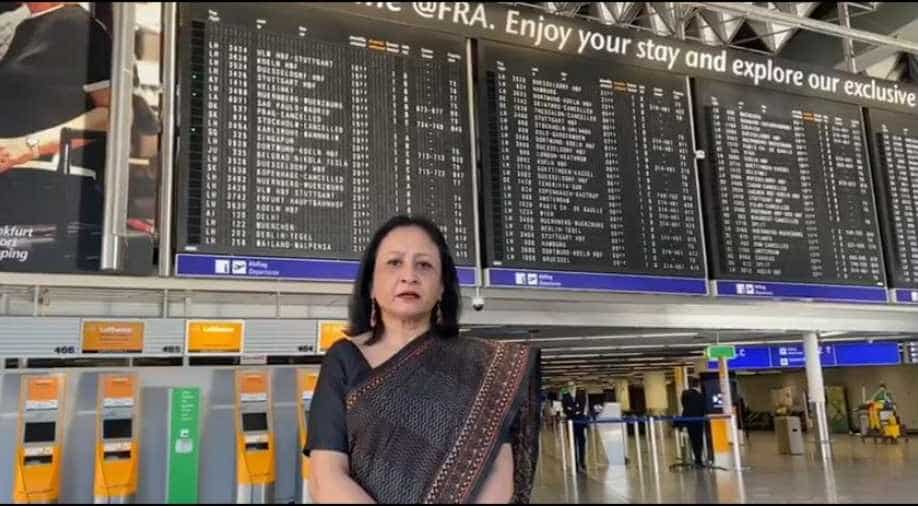 India's envoy to Germany Mukta Dutta Tomar highlighted the key role played by Gurudwaras in the country in providing food and support to stranded in Indians.

India has started repatriation flights from Germany with 2 flights this week, and more coming in future. Speaking to our Principal Diplomatic Correspondent Sidhant Sibal from Frankfurt airport, India's envoy to Germany Mukta Dutta Tomar highlighted the key role played by Gurudwaras in the country in providing food and support to stranded in Indians. Remember Gurudwaras in countries like Australia, Portugal, Canada, the US have been helping out the stranded Indian nationals. Ambassador Tomar also talked about how the mission reached to stranded Indian nationals via online means.

WION: Maam, if you can tell us about the repatriation efforts?

Mukta Dutta Tomar: So we have first 2 flights from Germany under the Vande Bharat mission. The first one today is to Delhi, the second one tomorrow is to Bengaluru. The flight will take back Indian nationals stranded in Germany for the past several months. People on the flight are elderly people, stranded people. Visitors who came on short term visas, expected mothers and students who have finished the studies. The Vande Bharat mission, as you know is a massive effort launched by govt of India. You are aware external affairs minister had a coordination meeting a few days ago. In the first phase, 100,000 Indian nationals who were bright back to India from 30 plus countries. In the second phase, they are going to bring back people from more than 60 countries who are being brought back to India. The effort has been really to cover the whole world to make sure that Indian nationals stranded all over the world to bring them back and we are all working towards that. These are our first 2 flights. But I want to assure all stranded Indians in Germany that don't worry, there are going to be more flights. Next week we have 2 more flights, we will increase our efforts to get people back to India.

Sidhant Sibal: How has been the situation of Indian nationals and how both countries have been in touch with each other?

Mukta Dutta Tomar: Indian nationals stranded in Germany have shown tremendous patience amidst many difficulties people have had. I like to thank them for patience while the situation comes under control. As you know in Germany, 180,000 people impacted but the deaths have been comparatively lower than many countries around 8000. The situation is slowly coming back under control. German health care system has worked well, and India and Germany have been working together and contact has been at the highest level. PM Modi and Chancellor Merkel, our Foreign ministers have also had contact. Our commerce and Industry Minister has also been in touch with his counterpart in federal chancellory. We are not only talking about how we can support each other in such difficult times of pandemic but also see how we can cooperate in research. These are times when all of you need to come together and that is the effort.

Mukta Dutta Tomar: German authorities have been very forthcoming in resolving the problems of Indian nationals stranded in Germany. In Germany, the Indian community and student associations have played a wonderful role in supporting Indian nationals in times of needs and they have really been the family of the nationals away from home. They have supported them materially and morally, provided them encouragement in difficult times. I must also mention, for us, the many Gurudwaras in Germany have played an important role in supporting food and other support people needed. The embassy and the consulates have been at the forefront of lending support to Indian nationals in these difficult and stressful times, via helplines, webinars, emails, we have worked non-stop since the beginning of the pandemic.