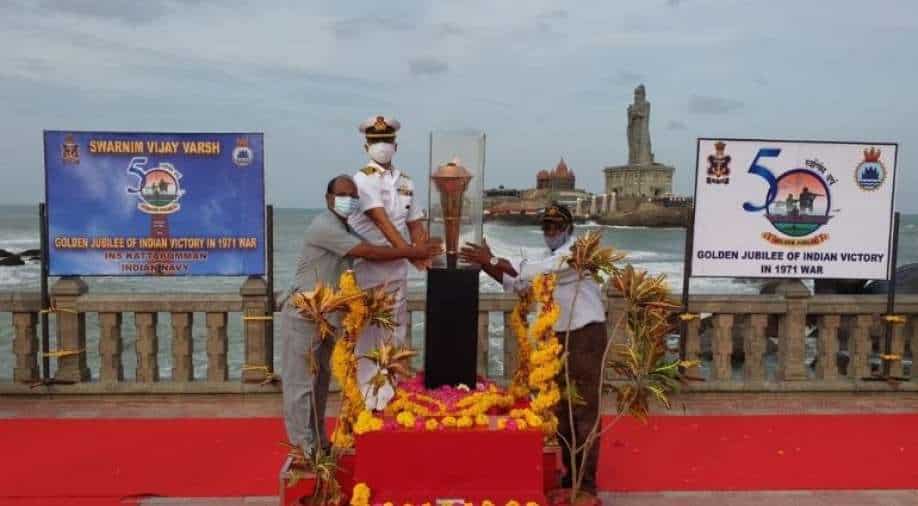 ‘Swarnim Vijay Mashal’ of the Flame of Victory that is being taken across India to honour and celebrate the 1971 war victory, reached the southern-most district of Kanyakumari. In adherence to COVID-19 protocols, veterans were honoured in the presence of the district civil administration.

The golden jubilee celebrations of the 1971 war victory commenced in December last year. Four victory flames were lit from the eternal flame at the National War Memorial and one each is being carried to the four directions, through the cities and villages of the 1971 war heroes.

It was on Sunday, July 11 that the Flame reached Naval Station INS Kattabomman located near Tirunelveli, where it was accorded a ceremonial  Guard of Honour and received by Station Commanded Captain Aashish K Sharma along with defence personnel, their families and veterans.

Following the Kanyakumari leg, the flame will also be taken to Tirunelveli district, to the houses of Late Sepoy Kasimani and Late Natik Sangili Chelliah who made the ultimate sacrifice during the 1971 war. The Veer Naris (war widows) would also be facilitated by the person from INS Kattabomman.

On Wednesday July 13, the the flame will pass through Tuticorin district, where it will be received by the Indian Coast Guard, following which  it will be handed over to INS Parundu on its way to Madurai.