Not a drill! Neha Dhupia gets married to Angad Bedi 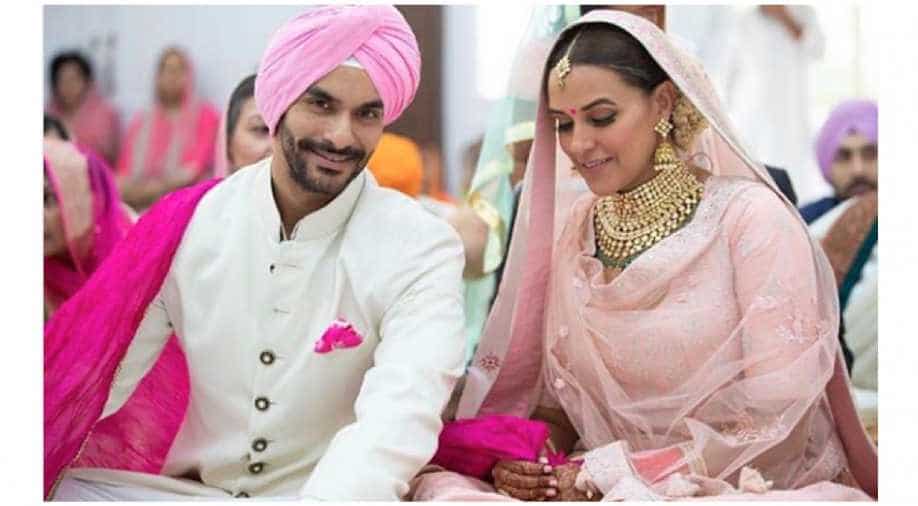 Barely any of us were over Sonam Kapoor's wedding with businessman Anand Ahuja that concluded on May 8 -- that another Bollywood actress entered the club today and with what a surprise. Shocking us all, Neha tied the knot with model-actor Angad Bedi who was last seen in TV series Inside Edge which was based on cricket and the game's dark side.

The secret wedding took place in New Delhi at a gurudwara that was attended by close family and friends. Celebs including Ajay Jadeja, Ashish Nehra and Gaurav Kapoor were present to bless the couple.

The actress chose an Anita Dongre pink lehenga with intricate work. She accentuated the look with Anita Dongre Fine Jewellery for the occasion as husband Angad wore a white sherwani and a turban that matched with the colour of his wife's dress.

Karan Johar announced the news on Twitter: "My darling and most special friend, Neha Dhupia, who l love and adore dearly is married to the gentleman and talented, Angad Bedi. Here's wishing them decades of unconditional love."

My darling and most special friend @NehaDhupia who l love and adore dearly is married to the gentleman and talented @Imangadbedi !! Here’s wishing them decades of unconditional love!!!!❤️❤️❤️❤️??? pic.twitter.com/LG1nR99aSW

Best decision of my life.. today, I married my best friend. Hello there, husband! @angadbedi ❤

On the work front, Neha Dhupia is busy with her chat shows on radio and TV. She was recently seen in films Tumhari Sulu and Qarib Qarib Singlle.