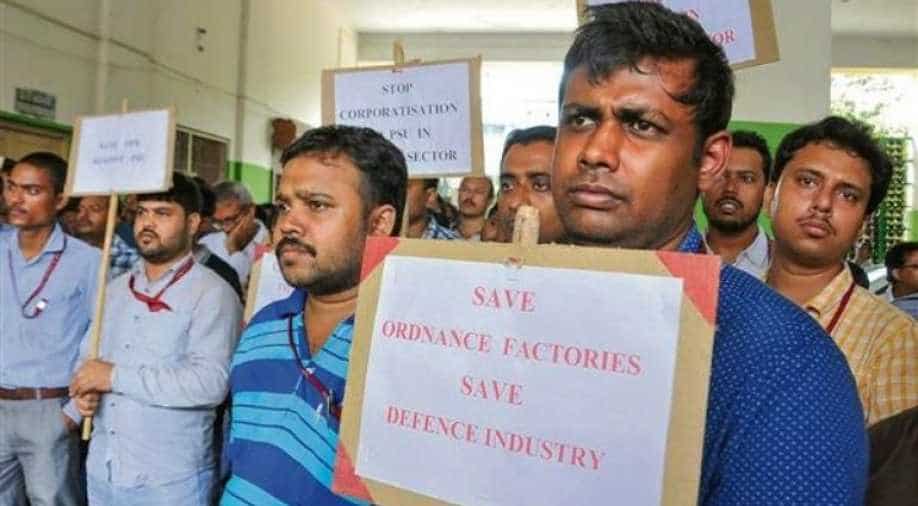 Three major employees' federations of the Ordnance Factory Board (OFB), which operates 41 ammunition production facilities across the country, on Friday called off their proposed indefinite strike from Monday following talks with the government, defence ministry officials said.

The federations of the OFB had given the call for the indefinite strike against the defence ministry's move to corporatise the 200-year-old organisation that supplies ammunition to the defence forces.

Last month, the government constituted an Empowered Group of Ministers (EGoM) under the chairmanship of Defence Minister Rajnath Singh to oversee the process of corporatisation of the OFB which was strongly opposed by the three unions.

The federations claimed to have support of over 70,000 employees of the OFB.

Additional Director General (Media and Communication) in the defence ministry A Bharat Bhushan Babu said the unions called off their strike following a "conciliation meeting" with the Ministry of Labour and Employment.

He said the ministry received a notice on August 4 from the three federations for the proposed strike from October 12 following which it referred the matter last month to the Chief Labour Commissioner in the Ministry of Labour and Employment to initiate conciliation in the matter.

"After a conciliation meeting today, the federations have called off the proposed strike from October 12," the spokesperson said.
Babu said it was agreed by the representatives of the federations and officials of the defence ministry that during the pendency of the on-going conciliation proceedings, the ministry will abide by the provisions of Section 33(1) of the Industrial Disputes Act 1947.

The provision stipulates that the employer cannot alter the conditions of service of the employees till the conclusion of conciliation proceedings.
"However, it will not affect the government's decision to corporatise Ordnance Factory Board," he said.

Babu said the defence ministry has also invited the representatives of the federations to meet secretary, Department of Defence Production and the Empowered Group of Ministers to put forward their issues and grievances.

At present, the government has to shell out around Rs 5,000 crore annually to pay salaries of the OFB employees. Additionally, it gives around Rs 3,000 crore to OFB as operational cost.

The ordnance factories were set up as "captive centres" to serve the needs of the armed forces, but they have been facing performance-related issues for a long time.

The defence ministry if of the view that the present structure of OFB is inconsistent with the requirement of production centre which calls for lot of flexibility at managerial and functional level.