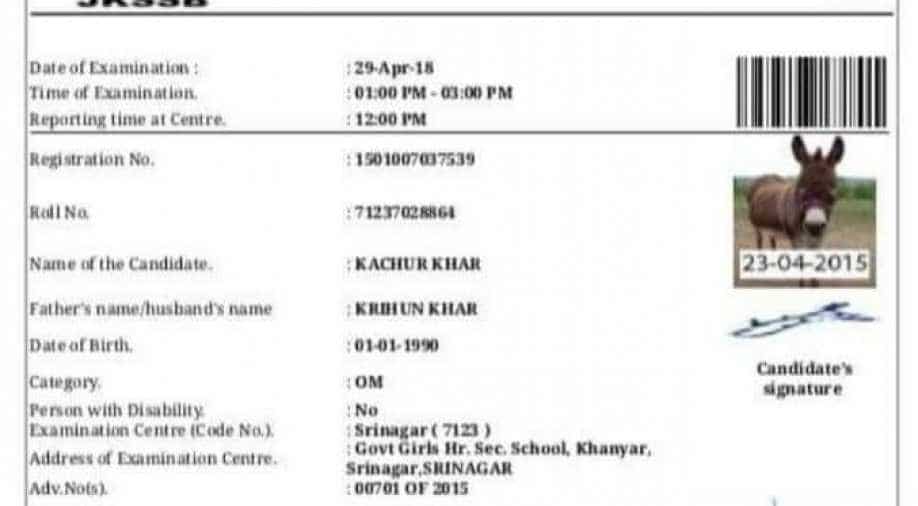 In a strange yet repeated incident, a donkey has now been issued an admit card to write an exam in Jammu and Kashmir to appear for a recruitment test for naib tehsildars, reports said on Saturday.

Of the nearly 1.5 lakh candidates issued admit cards to take the test for the 155 posts of naib tehsildar in J&K the Jammu and Kashmir Service Selection Board (SSB) has issued a computer-generated admit card in the donkey's name with a passport size photograph also mentioning details regarding his family background.

The picture of the admit card soon went viral on Twitter and Facebook. Social media users were having a field day over the apparent lapse by the authorities.

Under the SSB system, candidates fill out the application form online and upload their picture. They can then download their admit cards. Looks like pranksters made the most of the absence of a mechanism to check the veracity of every application. Chairman of SSB Simrandeep Singh said they will track down the IP address once the exam work is over.

A similar incident was reported two years back when a cow was issued an admit card for to write an examination in Jammu and Kashmir for a recruitment test for naib tehsildars.

This is how people on Twitter reacted to the bizarre news.

What does this admit card tell you? That a donkey is appearing in the #jkssb exam. NO!! It tells us that only donkeys are in open merit category !! @gowhargeelani @ayaanmaqsood @islahmufti pic.twitter.com/lbwVr4uZY7

J&KSSB has issued Admit Card to a "Donkey" for the Exam of Naib Tehsildar pic.twitter.com/6nBp6FoVmT

Year 2018, a hard working Blonde Donkey finally gets admit card for appearing in Naib Tehsildar exam. Issued by JKSSB.
Previously, a blonde Cow had been issued an admit card but it didn't show up on exam day . Lets hope, the Blonde Donkey shows up.. pic.twitter.com/Jg3U8fhIu5