Congress at forefront of celebrating jayantis of sultans: PM Modi at Karnataka rally 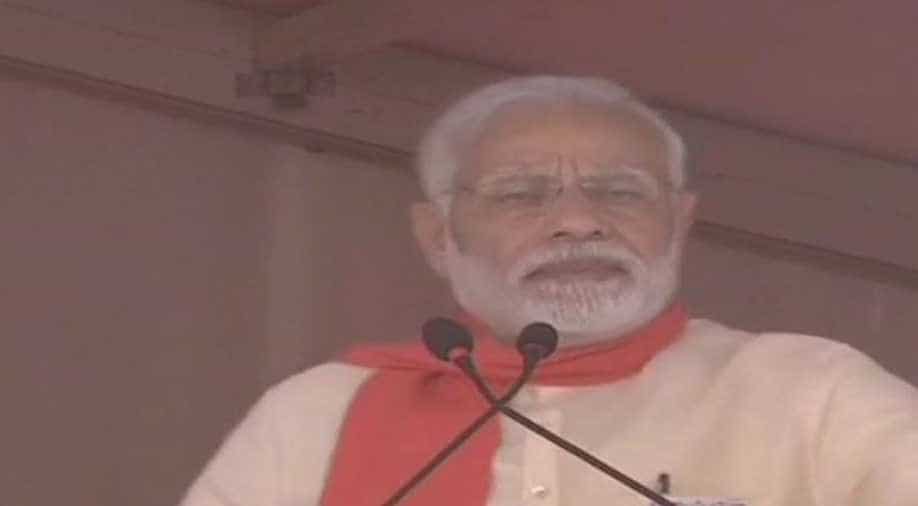 PM Modi addresses a rally in Karnataka's Chitradurga district on May 6. Photograph:( ANI )

Launching an attack on the Congress, the prime minister said the party had played with the sentiments of the people of Chitradurga

Launching an attack on the Congress, the prime minister said the party had played with the sentiments of the people of Chitradurga.

"Look at the Congress leaders, they do not know, whom they should remember and celebrate. They are at the forefront of celebrating jayantis of sultans," PM Modi said referring to the celebration of Tipu Jayanti in the state.

PM Modi claimed that the Congress did not care about the Dalits and was only concerned with deals.

"Congress does not care about 'Dil' (people's hearts and feelings) or Dalits. They only care about deals. If they cannot do welfare, then they should be bid farewell," PM Modi said.

"Congress is obviously uncomfortable today because the highest offices of the land are occupied by people from poor and humble backgrounds. That is why now Congress prefers to mislead in the name of the Dalit community," the prime minister said.

"Nijalingappa ji, the proud son of this land was insulted by one family who cannot tolerate independent leaders emerging in the Party. Nijalingappa ji committed the crime of questioning some of the policies from the time of Pandit Nehru."

Hailing Chitradurga as a land of bravehearts and scientists, PM Modi said the district's farmers had turned problems into opportunities and had always fought against drought.

"This place is synonymous with Jai Jawan, Jai Kisan, Jai Vigyan and is a living example of this mantra," PM Modi said.

"Chitradurga will soon become the hotspot of science and technology. It is a matter of pride that the mission Chandrayaan 2 is taking place on this soil by the ISRO unit of Chitradurga," PM Modi said.

The prime minister earlier thanked the people of Chitradurga and said he was humbled by their massive response.