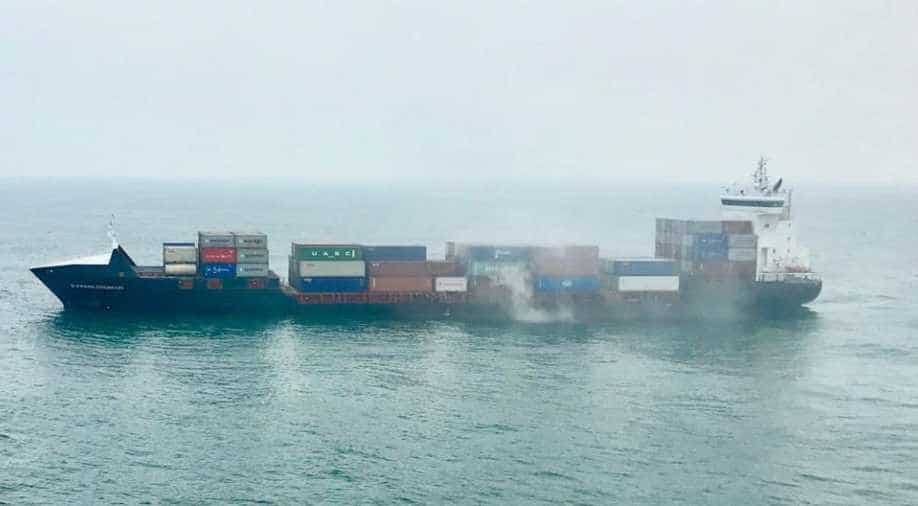 The container ship X-Press Godavari was in anchorage off Sandheads, which is over a 100kms away from the Haldia port in West Bengal.

Container ship X-Press Godavari is being escorted to the Kolkata port by an Indian Coast Guard vessel. This comes after an overnight firefighting effort, to douse a flame on a container that the ship was carrying.

The fire was first reported on Monday morning, following which the Indian Coast Guard had despatched assets to the location. The container ship X-Press Godavari was in anchorage off Sandheads, which is over a 100kms away from the Haldia port in West Bengal. Initially three Coast Guard vessels had reached the spot and carried out firefighting operations, while a Dornier aircraft was assessing the situation.

By Monday evening, a fourth Coast Guard vessel had joined the action and had successfully doused the blaze. Later, they undertook boundary cooling operations to prevent re-ignition. Boundary cooling is carried out to lower the temperature in the areas around the fire, as metal gets heated up quickly and could always have the potential to re-ignite owing to the retained heat (even in absence of a visible fire).

After carrying out boundary cooling operations through the night, the vessel is being escorted to Kolkata port, by an Indian Coast Guard ship.

Earlier this month, the Indian Coast Guard had taken up a daunting firefighting task, off the Sri Lanka Coast. In a mammoth effort that lasted nearly 10 days, Indian Coast Guard ships had doused the fire, and also ensured that there was no oil leak and environmental damage, from the mishap on very large crude carrier MT New Diamond.