Chikkarangappa comes through in a cliffhanger, edges out local favourite Karandeep Kochhar in a playoff to end two-year title drought 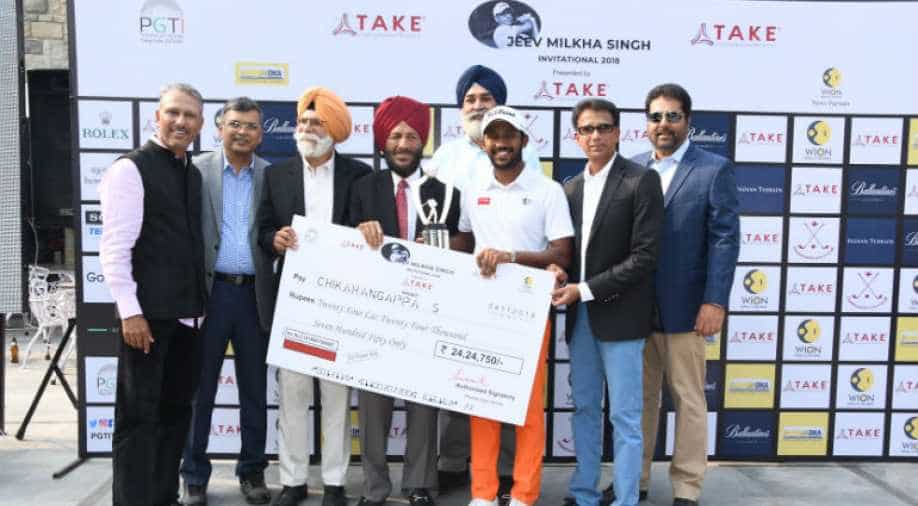 Chikkarangappa’s playoff win over local favourite Karandeep Kochhar provided a fitting finale to the first ever PGTI event to be named after a legendary Indian golfer.

The Jeev Milkha Singh Invitational 2018 presented by TAKE Solutions got off to a cracking start at the Chandigarh Golf Club on Thursday as Shiv Kapur, one of the star attractions at the Rs. 1.5 crore event, made a memorable return to The City Beautiful after almost two decades by posting a seven-under-65 that equaled the course record and gave him the first round lead.

Chandigarh lad Karandeep Kochhar, playing at his home course, shot an opening round of 66 to be hot on the leader’s heels in second place.

Teenager Karandeep Kochhar kept local hopes alive on day two as he carded a round of two-under-70 to move into the joint halfway lead along with Bengaluru’s Chikkarangappa S who fired the second day’s best score of six-under-66.

At the end of a wet and overcast third day, the odds were slightly in favour of Chikkarangappa since the 25-year-old produced a four-under-68, the day’s best score for the second day in succession, to build a two-stroke lead at 12-under-204.

Nineteen-year-old Karandeep Kochhar fired a 70 on day three to be placed second at 10-under-206.

Chikkarangappa’s playoff win over local favourite Karandeep Kochhar provided a fitting finale to the first ever PGTI event to be named after a legendary Indian golfer.

Chikka finally clinched his 11th title with a par on the first playoff hole of the Rs 1.5 crore event even as Karandeep missed a par putt from two feet to the utter disbelief of the home crowd. Chikka thus ended a two-year title drought.

Chikka, the overnight leader by two shots, began the day with two birdies to extend his lead to four shots and emerge as the frontrunner. However, there was a twist to follow as Karandeep birdied the fourth, fifth and 10th thanks to some long conversions to launch himself into a two-shot lead even as Chikka hit rough weather with bogeys on the fifth, sixth and seventh as a result of some errant iron shots.

The tide turned in Chikka’s favour once again when Kochhar bogeyed the 12th, 13th and 15th after making two three-putts on the stretch to concede a one-shot lead to Chikka. Both players birdied the 17th but Karandeep got back in the game with an unbelievable birdie conversion from off the green on the 18th to take the match into a playoff.

On the playoff hole, the more experienced Chikka kept his nerve by making par with a regulation two-putt while Kochhar missed par from two feet. Chikka thus kept his enviable playoff record intact by winning his fourth playoff on the PGTI. He is so far undefeated in playoffs. He took home the winner’s cheque worth Rs 24,24,750 and as a result climbed from 26th to third position on the PGTI Order of Merit.

Earlier in the week, the main event was preceded by the Pro-Am which saw the participation of Indian track legend and Jeev Milkha Singh’s father Mr. Milkha Singh as well as industrialist Pawan Munjal. The Pro-Am event was won by professional Digvijay Singh and his team comprising of amateurs Jyoti Matharoo, Sanjay Talwar and Gurpreet Bakshi.