Live: PM Modi to address the nation at 8am 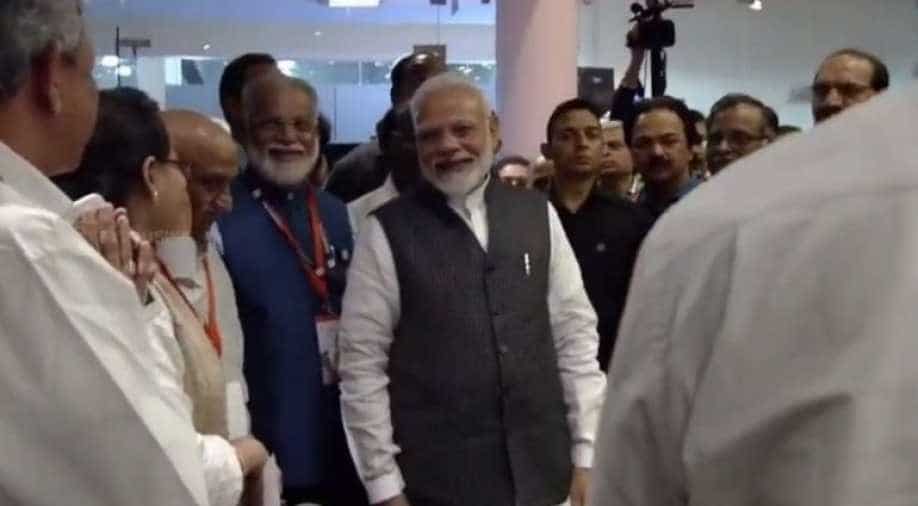 PM Modi will be addressing the nation at 8am today on India's Chandrayaan-2 mission.

"Vikram", the lander of Chandrayaan-2 lost communication with the ground station last night even as the prime minister lauded the achievement of scientists at ISRO.

"Don't lose hope. Be courageous. There are ups and downs in life. What you all have done is not a small thing. You have done a great service to the country, science and mankind. I am with you. I wish you all the best," the Prime Minister told the scientists.

ISRO chairman K Sivan announced that communication with Vikram lander was lost at 2.1 km from Lunar surface even though the descend was normal and planned.

"Communication with Vikram lander was lost. Data is being analyzed," the ISRO chief said.

India is proud of our scientists! They’ve given their best and have always made India proud. These are moments to be courageous, and courageous we will be!

Chairman @isro gave updates on Chandrayaan-2. We remain hopeful and will continue working hard on our space programme.

PM Narendra Modi at ISRO: There are ups and downs in life. This is not a small achievement. The nation in proud of you. Hope for the best. I congratulate you. You all have done a big service to nation, science and mankind. I am with you all the way, move forward bravely. pic.twitter.com/h6r1kwYlsC

Karnataka: #ISRO Chief K Sivan has briefed Prime Minister Narendra Modi about the status of landing of #VikramLander on the south pole of the moon. #Chandrayaan2Landing pic.twitter.com/MyjCji8Ukj

Isro awaits signal from Vikram lander. There will be an announcement soon, says a spokesperson for the space agency on TV. "All information has to be analysed," he says.

PM Modi at the ISRO monitoring Centre in Bengaluru

Karnataka: PM Modi at the #ISRO Centre in Bengaluru to watch the soft landing of Vikram lander on South Pole region of moon. 60 students from across the country, who were selected through ISRO's 'Space Quiz' competition will watch the landing along with PM. #Chandrayaan2 pic.twitter.com/e166MErF9X

History will be made tonight and PK Narendra Modi has arrived at the ISRO mission centre in Bengaluru to witness it firsthand. PM Modi is being briefed by the scientists about the details of the mission.

Jeff Bezos, Amazon founder and one of the world's richest men has tweeted Good luck to India for its Chandrayaan-2 mission.

The final descent of #Chandrayaan2 to take place on the Lunar South Pole, tonight. #Visuals from ISRO Monitoring Centre in Bengaluru. pic.twitter.com/dZTcjmkg6G

I am extremely excited to be at the ISRO Centre in Bengaluru to witness the extraordinary moment in the history of India’s space programme. Youngsters from different states will also be present to watch those special moments! There would also be youngsters from Bhutan.

ISRO Chairman K Sivan has said that landing on the lunar surface involves a lot of technical complexities - an event he described as "15 terrifying minutes."

The Chandrayaan-2 spacecraft will be the first-ever expedition to the south pole of the moon and the mission will make India the fourth country after the US, Russia, and China to conduct a soft landing on the lunar surface. Prime Minister Narendra Modi will be present in Bengaluru to witness the historic moment live. About 60-70 school students will also join PM Modi. The landing of Vikram lander will be followed by the Pragyan Rover roll out, from inside it, between 5.30 am to 6.30 am. ISRO chairman Dr K Sivan is also scheduled to address a press conference between 8.00 am to 9.00 am on September 7.