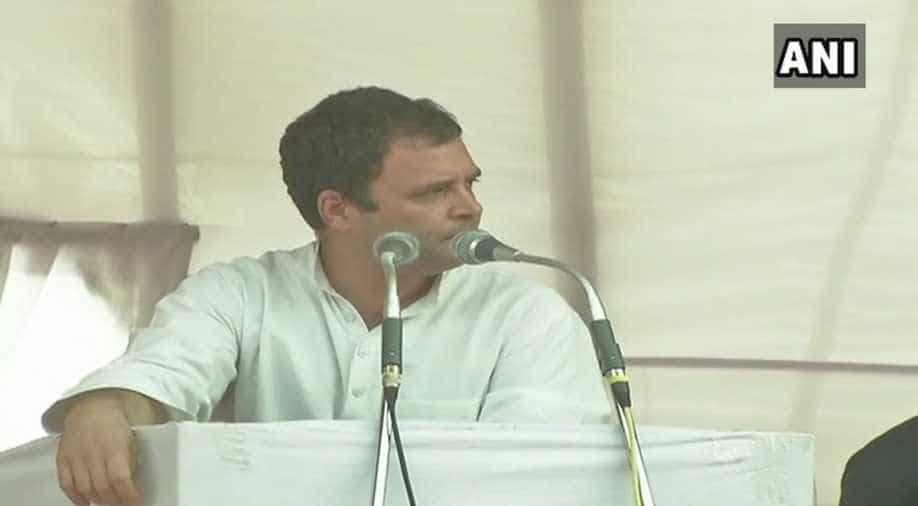 Against the backdrop of political developments in Karnataka, Congress president Rahul Gandhi today claimed the situation in the country was similar to that in Pakistan under "dictatorship".

At an event here, he alleged there was an atmosphere of fear in the country and the Constitution was under "severe attack", with even the institutions such as the judiciary and the press being suppressed and threatened.

His remarks came hours after BJP leader B S Yeddyurappa was sworn-in as the chief minister of Karnataka.

While the Congress-JD(S) combine in the state has been claiming a majority with the support of 117 MLAs, the BJP has 104 seats in the Assembly which has 224 elected members. Polling was not held in two seats. The House has a nominated seat.

"The Constitution is under severe attack in the country... In Karnataka, the MLAs are on one side and the Governor on the other and you know what attempt is being made," Gandhi said.

"The JD(S) leader has said its MLAs were offered Rs 100 crore," the Congress president said, apparently referring to H D Kumaraswami who had made the allegation.

Gandhi said, "One after another, you can see in every democratic institution in the country,..The RSS is trying to induct its people."

In the last 70 years, it was generally seen that the people approached the judiciary for seeking justice, he said.

"But for the first time it was seen that four judges of the Supreme Court appeared before the press and sought support from the public, saying they were being suppressed and not allowed to perform their duties.

He was apparently referring to the unprecedented press conference by four senior judges of the Supreme Court in January this year to express their grievances against the Chief Justice of India.

In his address at a 'Jan Swaraj Sammelan' here on the occasion of the silver jubilee of 73rd and 74th amendment in the Constitution related to local self-governance, the Congress leader accused the BJP and the RSS of capturing every democratic institution in country.

He said the Congress had ruled the country for several years but never tried to capture the democratic institutions.

Gandhi also alleged that the RSS and the BJP's target was to suppress the voice of Dalits, 'adivasis' (tribals) and women and distribute the country's wealth to some selected people.

"When farmers talk about loan waiver, (Finance Minister) Arun Jaitley says the Centre does not have any policy for it. But in the last one year, Rs 2.5 lakh crore loan of 15 rich people was waived. He (Jaitley) doesn't speak on it because it's in their policy," the Congress chief said.

He said that if the BJP wanted to talk about corruption, then its leaders should speak about the Rafale fighter deal, BJP chief's son and (Union minister) Piyush Goyal's company. However, he did not elaborate on it.

Gandhi alleged the BJP government has snatched the rights of farmers, villagers and poor and diluted the law.

He said the people will have to come together to fight against the ideology of the RSS and the BJP to protect the Constitution.

"If we want to fight against the ideology of the RSS and the BJP, the representatives and women who are sitting here, are our key strength," he said, referring to the panchayat members present at the event.

During the interaction with the representatives, Gandhi said if the Congress comes to power at the Centre, its focus will be on education, health and employment sectors in which the "Modi government has completely failed".

He said his party's government would waive farmers' loans within 10 days of coming to power in 2019.

Accusing the Modi government of considering farmers as a burden, he said the Congress considers them as its strength.

"If the Narendra Modi government can waive loans of 15 to 20 rich industrialists worth Rs 2.5 lakh crore, why can't farmers' loans be waived?" he asked.

"That amount is equivalent to Rs 35,000 crore that the UPA spent to implement the MNERGA scheme in the country," he said.

He said, "Modi calls Mehul Choksi as Mehul bhai. He knows Choksi and Nirav Modi well. Modi did not respond to my request to waive farm loans in the entire country."

The Congress government had brought the Land Acquisition Bill, in which it was clearly mentioned that panchayat's permission should be mandatory for acquiring land in a village, Gandhi said.

"The attack on me (by the BJP) was launched since the day I visited Bhatta Parsaul (in 2011 in Noida in UP). There I had raised questions and from that day they have been trying to corner me," he said.