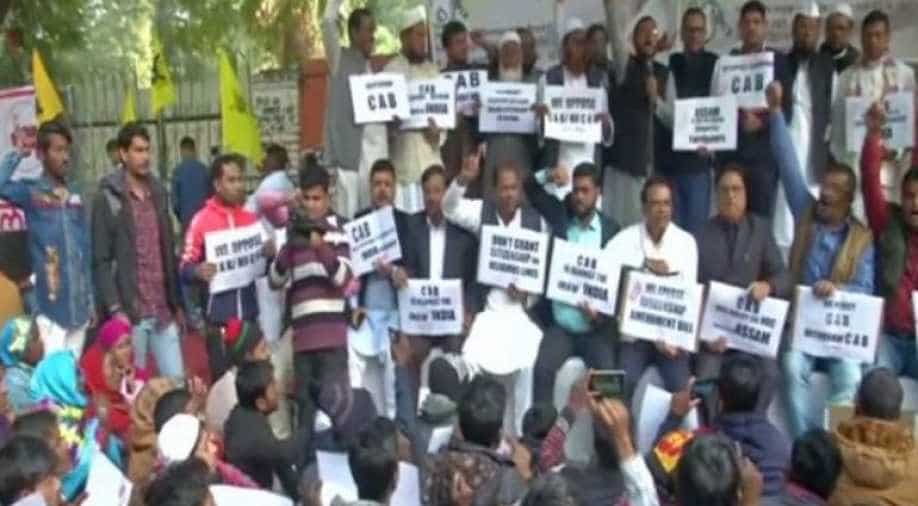 The All India United Democratic Front protesting against CAB at Jantar Mantar on Monday.  Photograph:( ANI )

The Citizenship (Amendment) Bill, that seeks to grant Indian citizenship to non-Muslim refugees from Pakistan, Bangladesh and Afghanistan, was tabled in Lok Sabha on Monday.

The All India United Democratic Front, an Assam-based political party, protested against the controversial Citizenship (Amendment) Bill, 2019 at Jantar Mantar in New Delhi on Monday.

Protestors marched with placards that read, `We oppose CAB` and `CAB is against the idea of India`.

"The Centre is trying to get illegal Bangladeshi immigrants into our state. We are against this Bill, and we will keep protesting against the Bill. The government can pass it but we will not let it be enforced into Assam," Nizamuddin Choudhury, a party legislator, told ANI.

"The CAB should be abolished because it is against our constitution. This is a religious bill, which violates the Assam Accord signed in 1985," said Sujabuddin Lashkar, a protestor.

The Citizenship (Amendment) Bill, that seeks to grant Indian citizenship to non-Muslim refugees from Pakistan, Bangladesh and Afghanistan, was tabled in Lok Sabha on Monday by Union Home Minister Amit Shah.

If passed, the legislation will enable Indian citizenship to the members of Hindu, Sikh, Buddhist, Jain, Parsi and Christian communities, who have come from the three countries to India till December 31, 2014, facing religious persecution and put an end to them being treated as illegal immigrants in the country.

The Bill has evoked mixed reactions from various sections of the society and the political parties. Leader of Congress in Lok Sabha, Adhir Ranjan Chowdhury, had on Sunday said that the party will oppose the Citizenship Amendment Bill "tooth and nail" in Parliament, calling it "violation" of the Indian Constitution.

Apart from this, several students and indigenous people`s rights organisations such as the All Assam Students` Union and the Indigenous People`s Front of Tripura , through marches and calling for strikes, have also carried out protests against the CAB.

The Bill was passed by the Lower House of the Parliament earlier this year but lapsed with the term of the previous Lok Sabha.