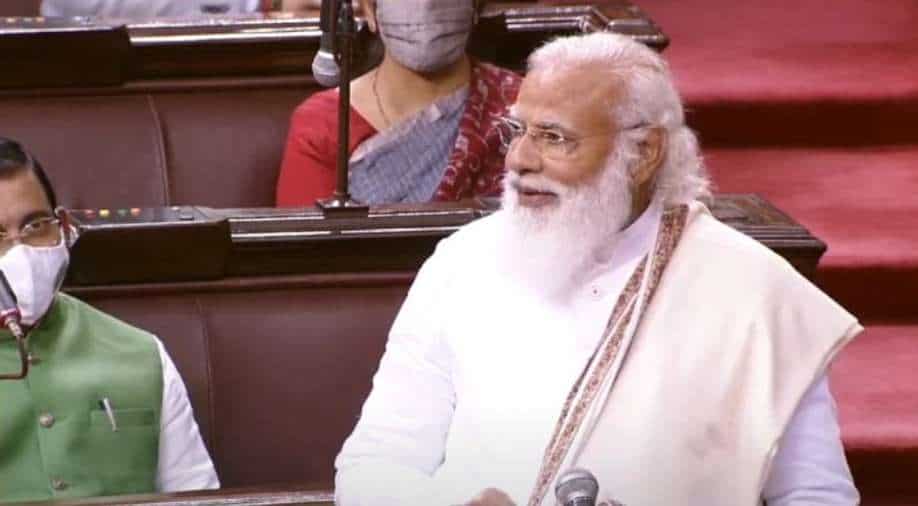 In his reply to the motion of thanks on the President`s Address in Lok Sabha, the Prime Minister said no mandis have been shut after the implementation of these laws and there has been no impact on the MSP. Congress members, who interrupted Prime Minister during his speech, later staged a walkout.

Prime Minister Narendra Modi on Wednesday said that the new farm laws have been brought to ease difficulties in agriculture and called upon protesting farmers to resume talks with the government over their demands.

Asserting that the central government honours the farmers and it is ready to accept their logical suggestions on the three farm laws, Prime Minister Narendra Modi said that the new farm laws provide an option to farmers and have been brought to meet the emerging challenges.

In his reply to the motion of thanks on the President`s Address in Lok Sabha, the Prime Minister said no mandis have been shut after the implementation of these laws and there has been no impact on the MSP. Congress members, who interrupted Prime Minister during his speech, later staged a walkout.

The agriculture sector has been facing challenges for years. We will have to make efforts to meet them and we have made honest efforts," he said. The Prime Minister accused the opposition of misleading farmers protesting against farm laws.

PM Modi said that the Parliament and the government respect the "sentiments of all agitating farmers".

"This is why the agriculture minister has been holding talks regularly with farmers groups with full honour and dignity. Talks have been going on for a while including way back when the agitation was in Punjab. We concede that if there is any shortcoming in the laws we are willing to amend. The changes should be practical and convincing," he said.

"This House, our Government and we all respect the farmers who are voicing their views on the farm bills. This is the reason why topmost Ministers of the Government are constantly talking to them. There is great respect for the farmers," he added.

He said the new farm laws provide alternatives to farmers. "I want to ask has anything been snatched that was available earlier? What has happened is an alternative option has been provided. That is the arrangement under the new laws," he said.The Prime Minister attacked Congress for disruptions in the House."Those who are disrupting the House are doing so as per a well-planned strategy. They are unable to digest that people are seeing through the truth. It will not work. Through their games, the trust of the people can never be won," he said.

He said Congress leaders had adopted one strategy in Rajya Sabha and a different approach in the Lok Sabha and this shows its "divisions". Taking a dig at Congress leader Adhir Ranjan Chaudhary who had been repeatedly interrupting him, the Prime Minister said his actions have been noted where he wanted it to be".

"Adhir Ranjan ji, ab zyada ho raha hai. I respect you. You will get more publicity than TMC in Bengal. Don't worry...This doesn`t look good, why are you doing this? These laws are not coercive. They only offer options."