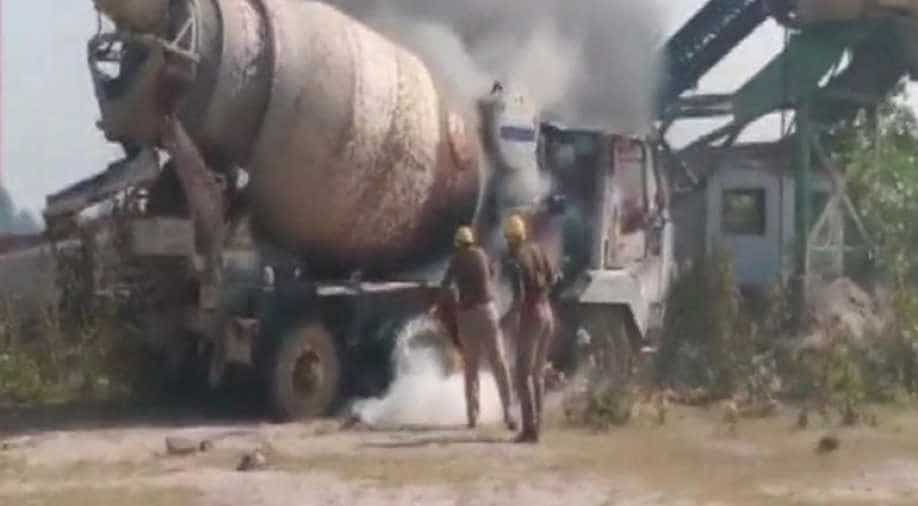 A pipe, kept in front of a power substation in Unnao, was also allegedly set ablaze by farmers

A vehicle of crusher plant was set ablaze by agitated farmers in Uttar Pradesh's Unnao on Sunday after the administration refused to grant them compensation for the land acquired by the Uttar Pradesh State Industrial Development Authority (UPSIDA) for the ambitious Trans-Ganga City.

"Some miscreants are doing this. We will go to villages and appeal to people to maintain peace. This is a deed of miscreants. We'll maintain peace and the work (Trans Ganga City project) will also go on," said Devendra Pandey, District Magistrate (DM) while speaking to media.

Notably, a pipe, kept in front of a power substation in Unnao, was also allegedly set ablaze by farmers in the morning to mark their protest.

The protesting farmers claim that their land was acquired by the Uttar Pradesh State Industrial Development Authority (UPSIDA) a few years back without any holding discussions with them and no compensation has been deposited in their bank accounts yet.

"We have been promised that we will get compensation. We have held several meetings with the police and officials but nothing has been done so far in the matter," said a farmer.

However, the official denied such claims said that each farmer has been given compensation to them in the past. Trans-Ganga City is being constructed for this development only. The situation is normal here," said an official from UPSIDA while speaking to ANI.

On Saturday, scores of farmers pelted stones at the JCB machine which was deployed to carry out work for the high-tech trans-Ganga city, claiming that they have not received compensation for their land acquired by the UPSIDA in 2012.

Trans Ganga City is the planned satellite township in the Indian province of Uttar Pradesh in the Unnao district which comes under the Kanpur metropolitan area.

The area comprises the stretch from the limits of the Unnao Municipality to the Ganga river near Kanpur on NH 25 and Unnao-Shuklaganj Highway.

The Uttar Pradesh government has also proposed a Skill Development University near the proposed Hi-tech city.