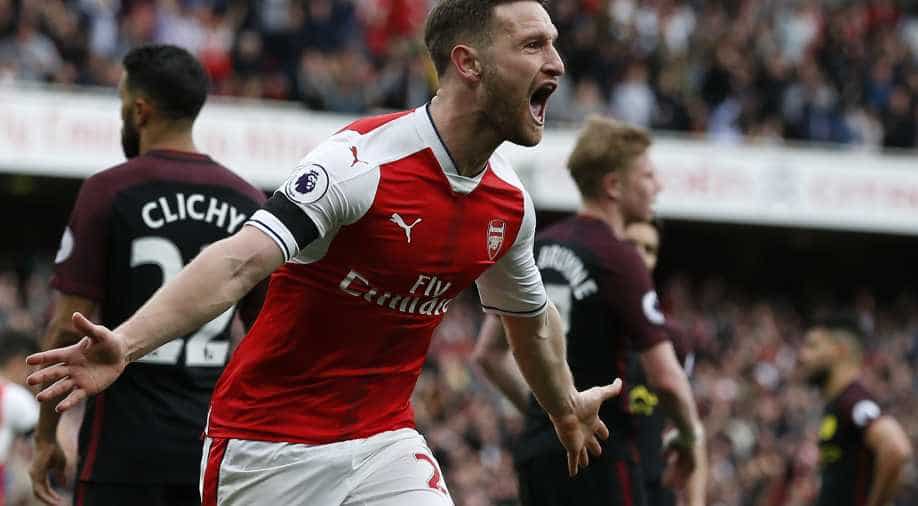 Arsene Wenger endured more frustration as Arsenal were held to a 2-2 draw by top four rivals Manchester City, while Swansea and Middlesbrough remain in relegation danger after a 0-0 draw on Sunday.

With Arsenal fans once again calling for Wenger to resign during a pre-match protest march outside the Emirates Stadium, the Gunners boss desperately needed a dominant display from his team.

Instead, Arsenal twice had to come from behind to avoid a third successive Premier League defeat.

The north Londoners remain in sixth place, seven points behind fourth-placed City in the fight to qualify for the Champions League via a top four finish.

"We were nervous and surprised by their start. I feared that we could start with the handbrake on because of the pressure we are under," Wenger said.

"We were not completely at our best because of the pressure but we showed mental strength and did not lie down.

"Mathematically a draw is not the best solution for both teams but it is a point which will help us."

City manager Pep Guardiola added: "We didn't play in the first half, after the goal we forgot to play, the desire went.

"In the second half we played more. We suffered a lot in the first half because we did not make those passes together. "

Arsenal fell behind after only five minutes when Leroy Sane held off Hector Bellerin as he accelerated onto Kevin De Bruyne's pass before rounding David Ospina and slotting home.

Theo Walcott equalised for Arsenal in the 40th minute when he stabbed in after City defender Gael Clichy played him onside following a half-cleared corner.

But Wenger's side were back on level terms again eight minutes after half-time as Shkodran Mustafi headed in from Mesut Ozil's corner.

City had a penalty appeal turned down when Nacho Monreal appeared to handle in the final seconds.

Guardiola's side have now drawn their last three league matches and have a five-point lead over fifth-placed Manchester United, who have a game in hand on their local rivals.

At the Liberty Stadium, Middlesbrough wasted a chance to boost their survival bid in a stalemate with relegation rivals Swansea.

Steve Agnew's side would have moved within two points of safety with a victory at the Liberty Stadium.

Middlesbrough, without a win in 12 league games, are four points behind third-bottom Hull, although they have a game in hand on both sides in the battle to avoid dropping into the Championship.

It was also a missed opportunity for Swansea, who could have pulled clear of the bottom three but instead remain deep in trouble themselves, just one point above Hull following their third successive game without a win.

"It would have been harsh if we'd lost that game on the chances we created. We just couldn't get over the line," Swansea boss Paul Clement said.

Middlesbrough manager Agnew added: "The attitude and intensity of the players was there for all to see and that will hold us in good stead."