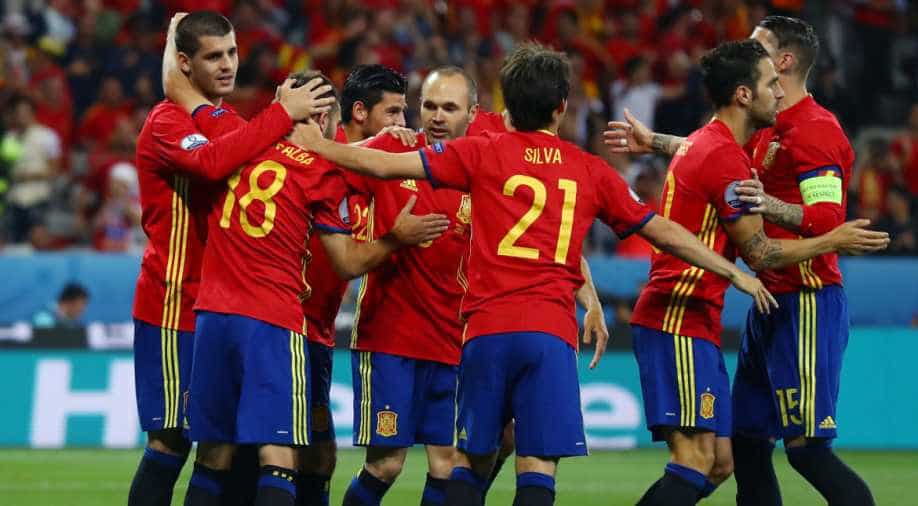 Spain will unleash striker Alvaro Morata, the competition's joint top scorer on three goals, on a solid Italian defence that he knows well from his just-completed two-year spell at Juventus. Photograph:( Getty )

To keep alive their hopes of a third consecutive European title, Spain must negotiate a repeat of the Euro 2012 final that they won 4-0.

But they come into today's game at on the back of a 2-1 defeat to Croatia which relegated Vicente Del Bosque's team to runners-up in Group D and into the path of Italy so early in the tournmant.

It will not get any easier for the winners as world champions Germany await in the quarter-finals.

While Italy arrived at the tournament with low expectations they impressed in their first two matches and Del Bosque insists they will pose a formidable threat at the Stade de France.

"We have a lot of respect for a very strong team like Italy. They are just as much favourites as we are," he said.

Recent history is on Spain's side -- they have won all seven of their knockout ties under Del Bosque at the Euros and World Cup.

Italy coach Antonio Conte urged his players to defy the odds in the 1600 GMT kickoff.

Spain will unleash striker Alvaro Morata, the competition's joint top scorer on three goals, on a solid Italian defence that he knows well from his just-completed two-year spell at Juventus.

Italy will be without Antonio Candreva because of a groin injury, with Alessandro Florenzi likely to replace him on the right side of midfield.

Chance of a lifetime

England were spared the task of facing Cristiano Ronaldo's Portugal when Iceland grabbed a last-gasp winner against Austria in their final group stage match.

Iceland's population of 330,000 makes them the smallest nation ever to have qualified for a major tournament and they approach the game in Nice as underdogs.

But the pressure is on England coach Roy Hodgson, who was criticised for weakening the side with six changes in the final group game against Slovakia which ended in a goalless stalemate.

Finishing second in Group B behind Wales put England into the more difficult side of the draw and if they overcome Iceland they will have to face hosts France in the capital on Sunday.

Hodgson has called the match in Nice (kickoff 1900 GMT) a "win or bust" clash and a defeat would call into question his future, but he has insisted he will not "beg" for his job.

"If they don't want me to, then my contract will have run out and that is how that will be. So I'm not begging for the job."

England captain Rooney, who has yet to score at Euro 2016, said he is wary of an Iceland team that twice defeated the Netherlands in qualifying and held Portugal in their opening group game.

"We're not going into this game showing a lack of respect for Iceland. We're showing full respect."

Iceland's co-coach Heimir Hallgrimsson said the game represents the opportunity of a lifetime for his players.

"If we beat England, their lives will change forever, and significantly. Icelandic football will go up in reputation and the way we approach football will be different," he said.

"But whichever way this goes, these players are winners already."

Iceland have complained they have only been granted between 3,000 and 3,500 places in the 34,500-capacity Stade de Nice, but thousands of their fans invaded Nice where they were drinking and swapping chants with England fans before the match.