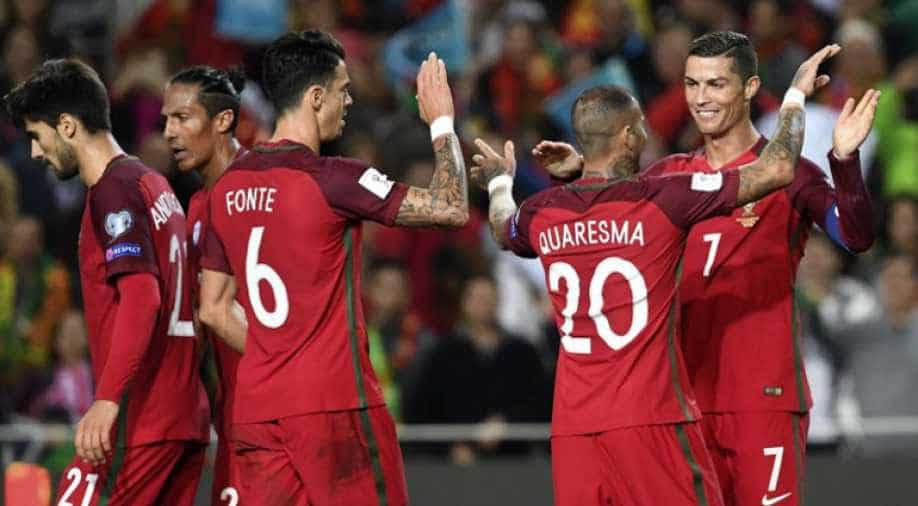 Portugal stayed second in Group B with nine points from four games, three behind leaders Switzerland. Portugal survived an early scare when a corner landed at the feet of Igors Tarasovs but he failed to connect cleanly and Rui Patricio saved. Photograph:( AFP )

Cristiano Ronaldo converted one penalty, missed another and also scored from open play as Portugal beat Latvia 4-1 in their World Cup qualifier on Sunday.

On a typically dramatic night for the Portugal captain, Ronaldo fired the European champions ahead from his first spot-kick of the evening in the first half but missed a chance to double their lead when his second effort struck the post.

It looked a costly miss when Arturs Zjuzins equalised for Latvia in the 68th minute but William Carvalho headed Portugal back in front two minutes later, Ronaldo volleyed the third and Bruno Alves completed the win.

Portugal stayed second in Group B with nine points from four games, three behind leaders Switzerland.

Portugal survived an early scare when a corner landed at the feet of Igors Tarasovs but he failed to connect cleanly and Rui Patricio saved.

After being restricted to long-range shots, Portugal broke the deadlock when Nani was tripped by Gints Freimanis and Ronaldo fired low to Andris Vanins' right in the 28th minute.

Portugal won another penalty when Glebs Kluskins tripped Andre Gomes in the 58th minute but this time Ronaldo, who also missed a penalty in the Euro 2016 match against Austria, saw his shot hit the inside of the post and roll across the goal.

Ten minutes later, Latvia, who had barely got out of their own half, equalised when substitute Zjuzins scored with his second attempt from the edge of the area.

But midfielder Carvalho came to the rescue two minutes later when he headed his first international goal from Ricardo Quaresma's cross.

Another Quaresma cross led to the third as it found Ronaldo at the far post and Portugal's all-time leading scorer volleyed home his 68th international goal.

Ronaldo then missed an easy chance for his hat-trick from Renato Sanches' pass and also headed against the crossbar before Alves headed in Raphael Guerreiro's chipped cross at the far post.