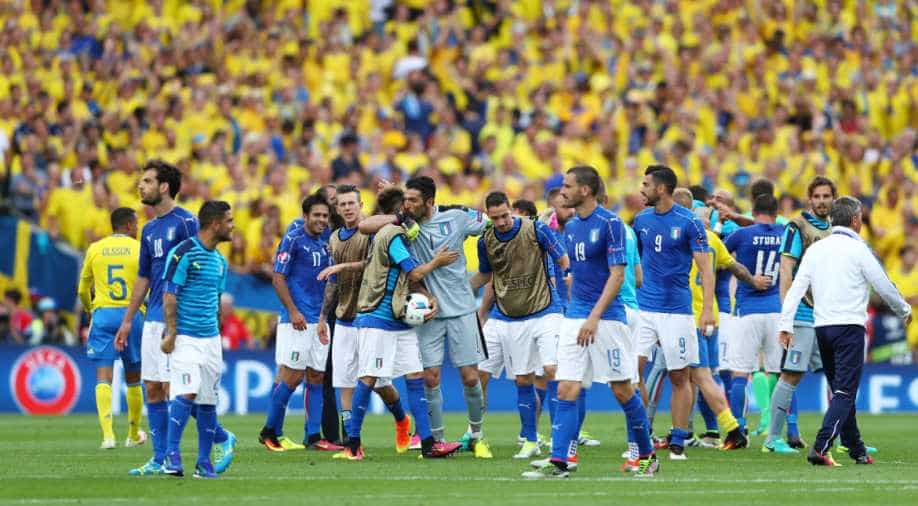 The result left Sweden in an uncomfortable position with one point after two games ahead of their final group clash against Belgium next week. Photograph:( Getty )

Follow Us
Italy moved into the knockout stages of Euro 2016 and continued to defy their doubters as Eder scored two minutes from fulltime to secure a 1-0 win over a shot-shy and unadventurous Sweden on Friday.
Eder ended a great run by firing home to move Italy clear at the top of Group E on six points after two matches following their 2-0 victory over Belgium in their opening encounter.
The result left Sweden in an uncomfortable position with one point after two games ahead of their final group clash against Belgium next week.
Sweden were well organised at the back but toothless in attack, with their danger man Zlatan Ibrahimovic looking a shadow of his brilliant best and hardly creating a chance.
Italy, who came into the tournament with questions surrounding the strength of their squad, but surprised many with their superb performance against a highly-fancied Belgium side, relied on their trademark, tight defence against the Swedes.
They rarely threatened up front, however, until Marco Parolo hit the crossbar with a header shortly before Eder netted the winner.
"It was a difficult game," Italy coach Antonio Conte told Rai Sport. "We struggled in the first half.
"The boys did well to ride the storm and hurt Sweden when we needed to."
Italy had been praised for their unity and work rate in their opening win over Belgium, but appeared to have no answer to Sweden's organised rearguard until Eder's late intervention.
Sweden coach Erik Hamren had criticised their lack of attacking vitality following their opening 1-1 draw with Ireland, and while there was an improvement in their overall performance, Ibrahimovic once again failed to provide a cutting edge and live up to his billing.
"We were much better than the Italians for periods, but we didn’t create really dangerous chances," Sweden midfielder Albin Ekdal told Swedish broadcaster SVT.
Sweden are still without a shot on target at the tournament, although Martin Olsson proved a menacing threat down the left, sending an effort just over the bar on 18 minutes having set the tone with an early cross that prompted a nervous clearance from Giorgio Chiellini.
Olsson's frequent forays left space for Antonio Candreva, but Andreas Isaksson and Erik Johansson combined to clear his testing deliveries, while Ibrahimovic flashed a close-range header wide towards the end of the first half.
Having masterminded victory over the Belgians, Conte's tactics were completely neutralised during the opening 45 minutes in Toulouse and his side appeared unsettled as a result.
"At halftime Conte told us we were too slow and he was right," Parolo told Rai Sport.
"We changed the tempo after the break and we deserved our victory."
Conte introduced Simone Zaza in the 60th minute and he had a decisive role in the winner, heading a Chiellini throw in into the path of Eder.
The forward then cut in from the left -- evading Andreas Granqvist's attempted tackle -- and sent a curling right-footed shot round Isaksson to take Italy through.
(Reuters)