France will have to take the game to Iceland, right from the start 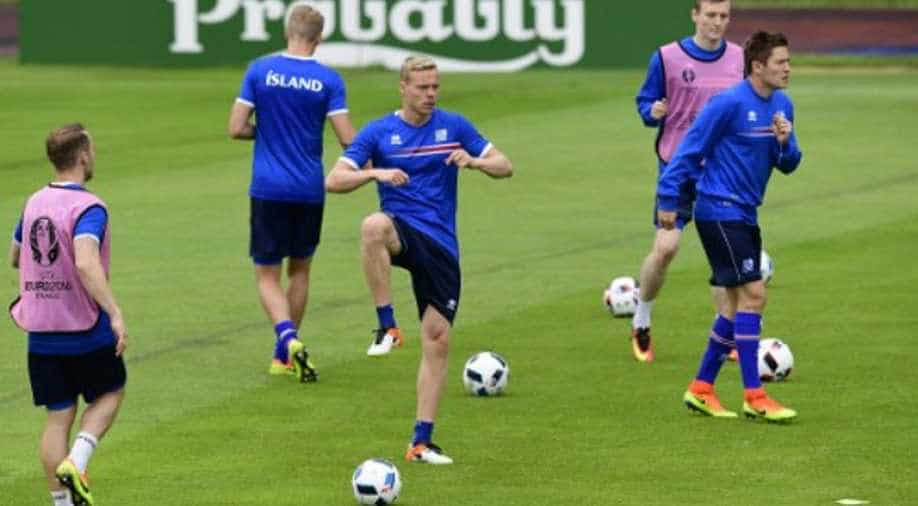 Iceland players attend a training session in Annecy, southeastern France, on July 2.? Photograph:(AFP)
Follow Us
France must take the game to Iceland right from the start of their European Championship quarter-final on Sunday or their dream of glory on home soil might end up buried in volcanic ash.

The hosts, who have often had to rely on late rallies, with all of their six goals so far scored in the second half, must wake up early for a change to avoid becoming the next casualties of a tiny country with a heart the size of a continent.

The smallest nation ever to appear at a major soccer event, Iceland reached the last eight with a shock 2-1 win over England and are now dreaming for a fairytale ending to their run, not unlike that of English club Leicester City, who stunned the soccer world by claiming the Premier League title last season.

"I think I would like it to end like it ended with Leicester City," Iceland joint-coach Heimir Hallgrimsson told reporters. "They played on their strengths and we are trying to play on ours. There is the same team spirit in both teams. We are willing to work for each other."

Iceland, a nation of 330,000 people known for its volcanoes, could also take inspiration from Denmark and Greece, who relied on a similar, defensive approach when they came out of nowhere to become European champions, in 1992 and 2004 respectively.

Courtesy of England, who looked clueless after finding themselves trailing Iceland 2-1 less than 20 minutes into their game, France know exactly what they must not do.

"Our opening minutes are very bad, we must improve in that department because we're not going to get away with it every time," said striker Antoine Griezmann, who scored twice to give France a 2-1 win over Ireland in the last 16.

As physical and tight at the back as they may be, Iceland should not be discarded as just another bunch of rough minnows with limited skills, warned France defender Patrice Evra.

"People go on about long throws and all that but Iceland are not just that," said the veteran left back. "They're a good team who can play good football and they did not get to that stage by accident."

France coach Didier Deschamps, who has kept tinkering with his team since the start of the tournament, will be forced to rejig once again with centre back Adil Rami and holding midfielder N'Golo Kante suspended.

New Barcelona signing Samuel Umtiti should step in for Rami, who will not be sorely missed after looking shaky a times, with the experienced Yohan Cabaye taking over Kante's crucial role in front of the defence.

Iceland are likely to stick to their resolute 4-4-2 system with now familiar players such as bearded, tattooed midfielder Aron Gunnarsson, who carries off the rugged Viking look to perfection and plays his club football in the second tier of the English league with Cardiff City.

In goal will stand Hannes Halldorsson, a former film director who shot the video for Iceland's 2012 Eurovision song contest entry and became a full-time professional only in 2014.

France, whose much more expensive talent will be tested on the Stade de France pitch, can at least rely on home advantage in their bid to set up a more tradiional battle against Germany or Italy for a place in the final.

"We certainly do not underestimate Iceland but we belong to the best sides in Europe, we're among the favourites and we're at home," said right-back Bacary Sagna.