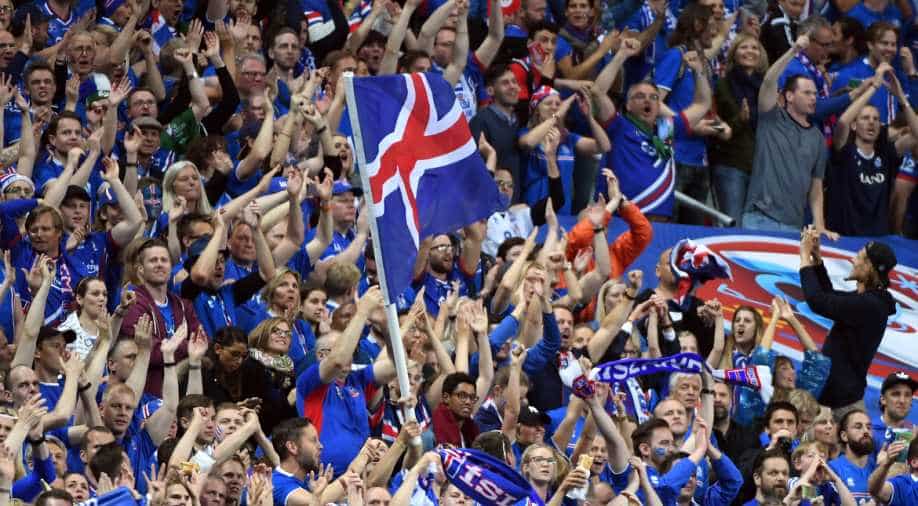 Iceland beat Austria to book a last-16 place, where they then defeated England 2-1 to set up a quarter-final with France. Photograph:( AFP )

Follow Us
Iceland's footballers received a heroes welcome on returning home on Monday following their astonishing run to the Euro 2016 quarter-finals in France.

Their plane flew low over the capital Reykjavik before landing at Keflavik airport where the local fire services gave them a fire hose guard of honour with shooting water creating a rainbow.

Striker Kolbeinn Sigthorsson, who scored a consolation goal in the crushing 5-2 defeat to the hosts at the Stade de France on Sunday, said he was happy to be home.

"It was a dream come true to get that support," he said of the estimated 30,000 fans - some 10 per cent of the population - who followed the nation to France.

"We experienced something simply wonderful, it was a dream come true and we are proud to have brought such cheer to our country," he said, adding that the friendly behaviour of the fans had done the country proud.

The players were then paraded through the streets of the capital on a double decker bus in the direction of Arnarholl Park, to celebrate with their fans and sing the famous huh - the Viking war chant - which is actually Scottish, punctuated by hand clapping.

"Fairy tales still exist! It's rare - if indeed this has ever happened - to unite us Icelanders as you did on the football pitch," Prime Minister Sigurdur Ingi Johannsson told the team in downtown Reykjavik, to the resounding cheers of tens of thousands of supporters.

"You are a national treasure!" he added as fans waved flags and team jerseys, and children held aloft cards with their favourite players.

To the delight of the crowd, the heroes of the day sang the huh watched emotionally by Swedish coach Lars Lagerback who hailed a "team performance" and confided he felt "at home" whenever he was in Iceland.

Many present had also followed the team to France. "They react with pride even after defeat. They did not give up, they did not stop, they return as heroes," said August Ingi Kristjansson, a 23-year-old who was present in Stade de France on Sunday.

"I'm just so proud!" added Sverrir Gardarsson. "What will happen next? We will rule the world!"

Iceland drew with Hungary and Portugal, then beat Austria to book a last-16 place, where they then defeated England 2-1 to set up a quarter-final with France.