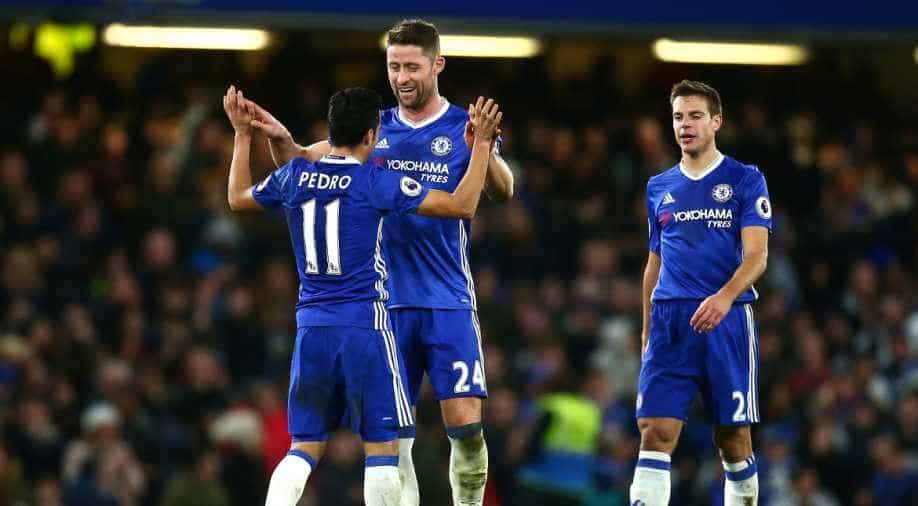 In photo: Pedro of Chelsea celebrates with Gary Cahill of Chelsea after scoring his second and his sides third goal during the Premier League match between Chelsea and AFC Bournemouth at Stamford Bridge on December 26, 2016. Photograph:( Getty )

A supremely confident Chelsea notched a club record 12th consecutive league win on Monday to move nine points clear at the top of the Premier League, two goals from Pedro and one from Eden Hazard giving them a 3-0 victory over Bournemouth.

It took the energetic Pedro until the 24th minute to score, set up by Cesc Fabregas after jinking interplay between the Spanish players, Hazard, Willian and Nemanja Matic. He deftly lofted the ball over Artur Boruc, stranded in the Bournemouth goalmouth.

Captain Simon Francis brought down a sashaying Hazard in the Bournemouth area in the 49th minute and the Belgian converted the penalty for his 50th Premier League goal.

Chelsea, who have conceded only two goals on their winning run under Antonio Conte and scored 27, added the third in stoppage time when Pedro's surging run ended with the ball deflected into the goal.