Chelsea beat Arsenal to zoom off to 12-point lead 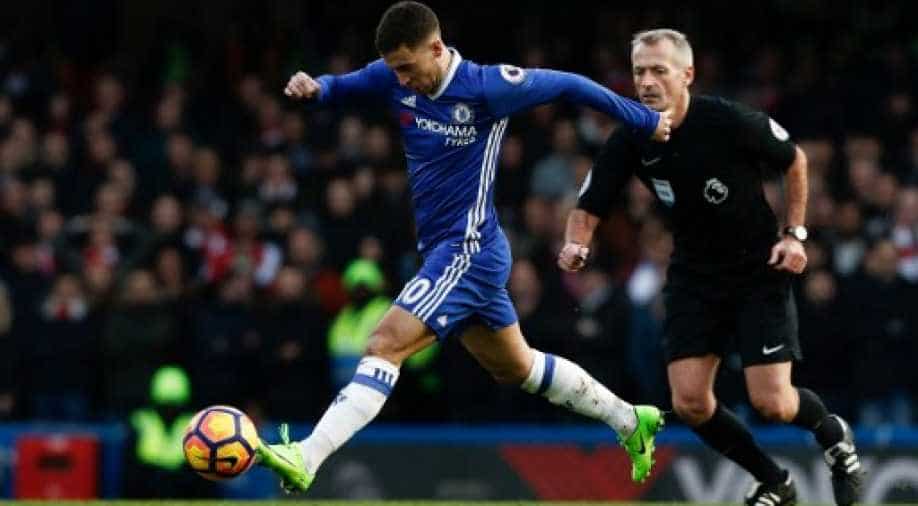 Eden Hazard left a trail of defenders in his wake to double?Chelsea's lead in the 53rd minute of the high-stakes match. Photograph:( AFP )

The Belgian winger left a trail of defenders in his wake to double Chelsea's lead in the 53rd minute, in between a contentious header by Marcos Alonso and a late lob from Arsenal old boy Cesc Fabregas.

It was Chelsea's 11th home victory in succession and their 16th win in 18 league games, stretching their lead over third-place Arsenal to a huge 12 points with 14 games of the season remaining.

"I think we are showing we deserve to stay on top of the table," said Chelsea manager Antonio Conte.

"I am very pleased for my players. In every session they show me great attitude and great will to fight and win this league."

Chelsea have been close to unplayable since Conte changed their system to a 3-4-3 during their 3-0 loss at Arsenal on September 24 and it seems only a matter of time until they are crowned champions.

For Arsenal manager Arsene Wenger, who watched from the stands as he served the third game of a four-match touchline ban, his side's season is following a wearily familiar pattern.

Arsenal have lost their last five games at the Bridge and had conceded 13 unanswered goals prior to Olivier Giroud's stoppage-time consolation.

Beaten for the fourth time in nine league games, they once again face the prospect of a run-in given suspense only by the tussle for Champions League places.

Wenger felt Alonso's goal was "100 percent a foul" on Hector Bellerin, but conceded: "We were really naive and not clinical in our defending. Then Chelsea looked the better side."

With a raft of midfielders unavailable, Wenger was obliged to start with Alex Oxlade-Chamberlain alongside Francis Coquelin in the middle, while Theo Walcott replaced Giroud in attack.

Arsenal had conceded two goals in the first 13 minutes of Tuesday's 2-1 loss at home to Watford.

But after Gary Cahill had headed into the ground and over the bar at the other end, Chelsea went ahead in the 13th minute with a goal that left Arsenal's fans fuming.

Pedro sent a cross into the box from the right that Diego Costa headed against the bar at the near post, sending the ball spinning into the air.

As Bellerin got himself in position to head it away, and with Walcott watching on impassively, Alonso flew in, cleaning his fellow Spaniard out with his forearm and heading the ball home.

Referee Martin Atkinson allowed the goal to stand and Arsenal's disappointment was compounded by the sight of a dazed Bellerin being led down the tunnel, with Gabriel taking his place.

Chelsea were buoyant, Costa driving a shot into the side-netting and Pedro forcing Petr Cech to push the ball behind from Alonso's accurate cut-back.

But Arsenal ended the first half strongly, Courtois producing a stunning one-handed save to turn Gabriel's header over the bar and then dropping onto a tame effort by Mesut Ozil.

It took a last-ditch tackle by Laurent Koscielny to prevent Hazard scampering clear early in the second half, but when the Chelseanumber 10 picked up the ball minutes later there was no getting it back.

After striding onto a loose ball in the centre circle, he beat Koscielny, shrugged off Coquelin, leaving him flat on his back, and then outfoxed Koscielny again before squeezing a shot past Cech.

On the touchline, Conte celebrated with even greater abandon than usual, leaping into the crowd.

There were flickers from Arsenal, Courtois clawing away a deft header from substitute Danny Welbeck, before Fabregas lobbed in from 25 yards after Cech shanked the ball straight to him.

Giroud reduced the arrears, heading in from Nacho Monreal's cross.