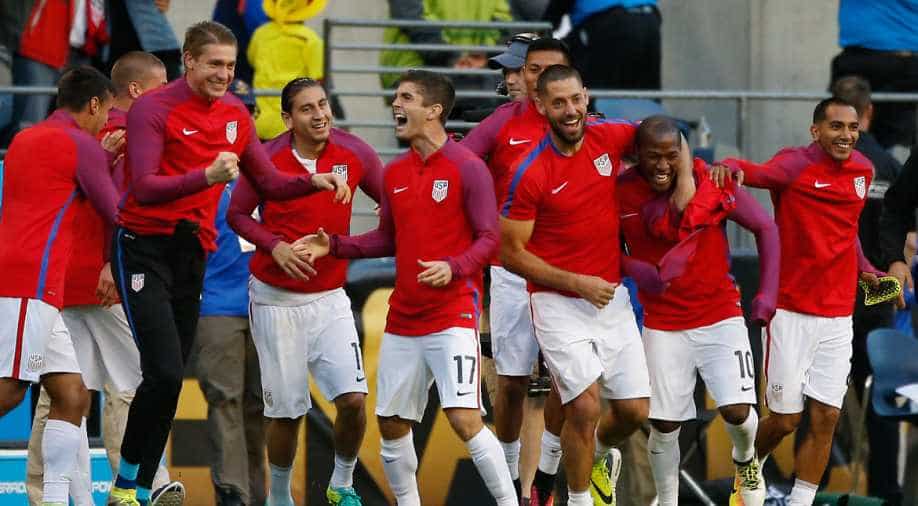 "We've come so far now and now we get even hungrier for the next step," said US coach Jurgen Klinsmann. Photograph:( Getty )

Follow Us
The United States survived a late onslaught to beat Ecuador 2-1 and advance to the semi-finals of the Copa America for the first time since 1995 after a pulsating and sometime fractious match in Seattle on Thursday.

Clint Dempsey and Gyasi Zardes scored for the US either side of half time and Michael Arroyo got one back for Ecuador in a game that saw one player from each side sent off and the Ecuador coach banished to the stands.

Ecuador came into the game more after Antonio Valencia and Jermaine Jones were shown red cards in the 51st minute but the hosts prevailed to set up a semi-final against either Argentina or Venezuela in Houston next Tuesday.

"We've come so far now and now we get even hungrier for the next step," said US coach Jurgen Klinsmann.

"The team performance was outstanding. They were helping each other all over the field."

Dempsey, a striker who plays for local club Seattle Sounders, got the opener for the US after 21 minutes when he rose to head home a deft cross from Jones.

He almost got a second four minutes later but his angled-drive was well saved and Alejandro Bedoya should have done better when Dempsey's pass left him with a shot on goal that Alexander Dominguez got down well to smother.

At the other end, Brad Guzan did well to turn an Enner Valencia shot round the post as he honed in on goal.

Then came the dismissals with Antonio Valencia sent off for a second yellow after hacking down Bedoya and his fellow midfielder Jones harshly shown a straight red for raising his hand in the ensuing scuffle.

Zardes doubled the home side's lead when he poked home from inches out after Dempsey had beaten the goalie but the goal roused Ecuador and they took control of the game.

Enner Valencia should have scored at least twice from close range headers but it was Arroyo who cut the lead after 73 minutes when he found the net with a low drive from the edge of the box after the defence had given him too much space.

The South Americans threw everything at the hosts in the final quarter but they could not find a second goal and the U.S. advanced to the last four.
(Reuters)