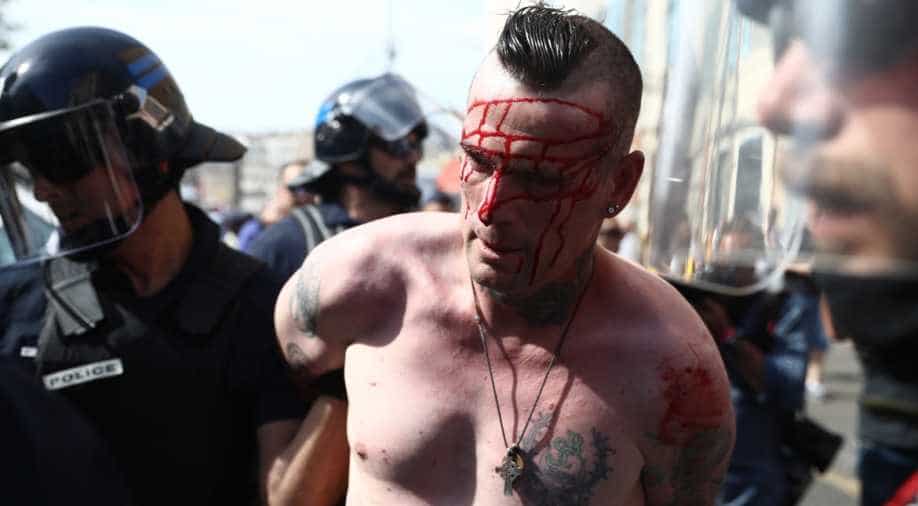 An injured England fan is arrested after clashes ahead of the game against Russia on June 11, 2016, in Marseille, France. Photograph:( Getty )

Follow Us
Russian hooligans prepared for "ultra-rapid, ultra-violent action" were involved in the worst of the fighting that hit Marseille at the start of the Euro 2016 football tournament, the French city's chief prosecutor said on Monday.

An Englishman in his 50s remained in a critical condition in hospital after he was assaulted, one of 35 people injured during three days of fighting involving Russian, English and French fans in Marseille's Vieux Port (Old Port).

European football's governing body, UEFA, said it was "disgusted" by melees inside and outside the stadium in Marseille, where the English and Russian sides played on Saturday, and has threatened to expel both teams from the championship if the violence persists.

"There were 150 Russian supporters who in reality were hooligans," Marseille prosecutor Brice Robin told a news conference. "These people were well prepared for ultra-rapid, ultra-violent action."

Scenes of rival fans wielding metal bars and hurling beer bottles in street clashes in Marseille, as well as incidents in Nice, Lille and Paris, underscore the challenge football federations in Europe face in stamping out hooliganism.

Further along, the Mediterranean coast from Marseille, Nice's prosecutor said violence there involving Northern Irish fans on Saturday night was instigated by remnants of the now-disbanded French fan group.

England fans have said they were ambushed by squads of Russian assailants in at least one incident, though the Marseille prosecutor made clear that England supporters were responsible for some of the skirmishes in Marseille.

On Monday, a Marseille court began hearing fast-track trials of 10 people held in police custody; six Britons, three French nationals and an Austrian. All were charged with violence involving a weapon, mostly against law enforcement officers.

In the first cases to be heard, five England fans were sentenced to jail terms of between one and three months, while a Frenchman received a two-year term.

"I'm truly sorry. I was in the wrong place at the wrong time, but I'm no hooligan," English cook Alexander Booth, 20, told the judge before his two-month sentence was read out.

After the weekend clashes, some Russians posted photos of themselves on social media holding stolen English supporters' flags upside down, some spotted with blood, as trophies. The hooligans, who often refer to themselves as 'ultras', belong to an organised tradition of hooliganism which has its roots mainly around clubs in Moscow and St Petersburg.

No Russians were arrested over the weekend, Robin acknowledged. Asked why not, the prosecutor said they had carried out lightning strikes which made arrests difficult and that closed-circuit television footage was still being studied. "These are highly trained people," Robin said.

Robin said some Russian supporters were turned back on arrival at Marseille international airport but others had arrived overland.

French officials say 3,000 England football fans had been slapped with banning orders to block their travel to France due to previous offences, while only 30 Russian supporters were prevented from travelling.

A spokeswoman for British Prime Minister David Cameron said his government welcomed the UEFA investigation and that it was also vital to review crowd-control methods inside stadiums.

Asked whether a complaint had been made about Russian fan behaviour, she said: "We have raised our concerns".