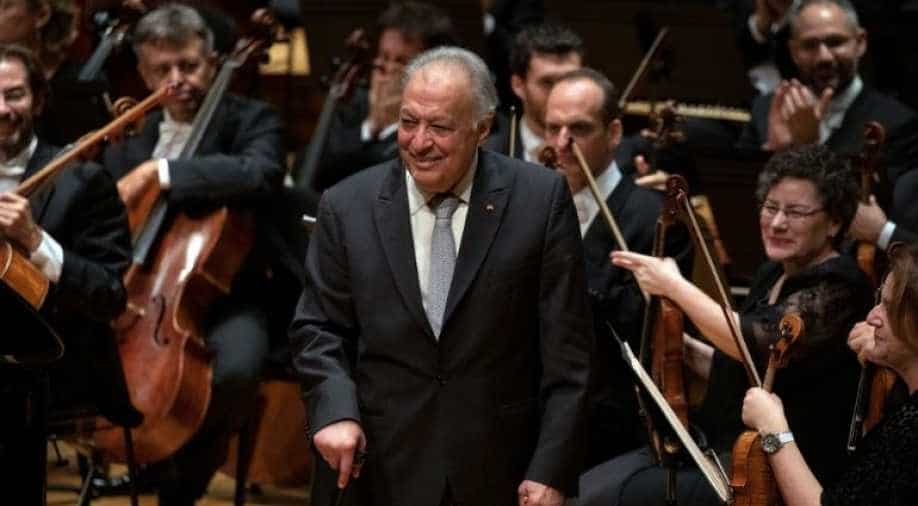 Maestro Zubin Mehta takes the stage in a series of farewell concerts with the Israeli Philharmonic ending his 50-year tenure with the orchestra in Tel Aviv, Israel October 18, 2019. Photograph:( Reuters )

The 83-year-old Indian conductor capped off thousands of performances as music director of the renowned symphony orchestra in a series of farewell concerts in Tel Aviv this week, making way for Lahav Shani, 30, to take the reins.

Zubin Mehta was only 25 years old when he first conducted the Israel Philharmonic. Over half a century later, he`s passing the baton to a fast-rising Israeli maestro some 53 years his junior.

The 83-year-old Indian conductor capped off thousands of performances as music director of the renowned symphony orchestra in a series of farewell concerts in Tel Aviv this week, making way for Lahav Shani, 30, to take the reins.

Shani has dazzled audiences for over a decade as both conductor and pianist, building an enviable portfolio of podium appointments in Europe and debasing questions about his youth with his virtuosic musical bravado.

"There`s no way any conductor could have done all 104 symphonies of Haydn, so there`s lots left for Lahav," Mehta told Reuters in an interview with the duo, where he gave advice to and talked repertoire with Shani, who becomes music director in 2020.

Shani began piano studies while growing up in Tel Aviv, and with Mehta`s encouragement, later expanded his training to orchestral conducting at Berlin`s esteemed Academy of Music Hanns Eisler.

"I (listened) to the orchestra with the maestro (Mehta) many times as a child," Shani said. "When I was a student, I learned from the musicians in the orchestra. They were my teachers for chamber music (and) double bass."

Shani first performed with the 100-member orchestra when he was 18, playing Tchaikovsky`s Piano Concert No. 1. His active schedule as a pianist this season includes performances of Rachmaninov`s Piano Concerto No. 3 with the Staatskapelle Berlin.
He concurrently serves as chief conductor of the Rotterdam Philharmonic -- its youngest ever -- and principal guest conductor of the Vienna Symphony.

The Mumbai-born conductor`s tenure with the ensemble, founded in 1936 as the Palestine Orchestra when the region was under British rule, has spanned much of Israel`s dramatic history since the country`s founding in 1948.

Mehta`s storied six-decade career also saw him lead the philharmonic orchestras of New York and Los Angeles and the main opera houses of Munich and Florence.

But Israel`s orchestra was a mainstay throughout. Mehta says he stayed on as music adviser and director since 1969, in part out of admiration for an Israeli audience that cherishes the arts during times of conflict.

Mehta recalled a Tel Aviv performance during the height of war with Gaza`s Hamas militant group, where rocket sirens forced him to pause the concert.