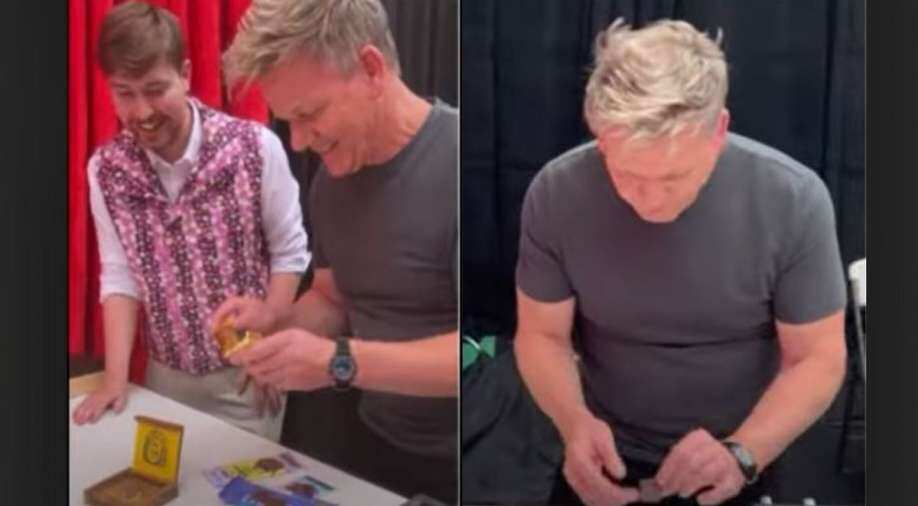 Recently, popular American YouTuber Jimmy Donaldson aka Mr Beast invited Ramsay to his chocolate factory for some tasting much aware that he may be facing brickbats from the famous chef.

You need to be prepared for brutal feedback when you are feeding something to star chef Gordon Ramsay. The celebrity chef is not just known for his culinary skills but also is (in)famous for his brutal opinion on food prepared by participants of the reality show 'MasterChef'.

Recently, popular American YouTuber Jimmy Donaldson aka Mr Beast invited Ramsay to his chocolate factory for some tasting much aware that he may be facing brickbats from the famous chef.

Jimmy recently uploaded a video on YouTube featuring himself, alongside Ramsay where the two can be seen comparing Jimmy’s chocolate bars to one of the most expensive ones in the market. The video was captioned as, “Gordon Ramsay Tries Most Expensive Chocolate Bar.”

The video had Gordon Ramsay comparing Jimmy's chocolate bar to one of the most expensive chocolate bars costing about USD 400.

In the video, Ramsay can be seen first trying Jimmy’s chocolate bar, and says “very good," after a bite. Next, Jimmy opens the $400 worth of chocolate bar for the chef to taste.

Ramsay can be seen devouring a chunk of the expensive chocolate when Jimmy interrupts him and asks which one is better. To which Ramsay says, "Definitely yours." Jimmy can be seen getting visibly excited when the celebrity chef quips, "is second." A classic Gordan Ramsay-style roast!

The popular YouTuber ventured into the chocolate industry as he launched his brand Feastables, a chocolate bar company.

The company reportedly has also its own chocolate factory-inspired by the reel life character Willy Wonka from 1971 film.