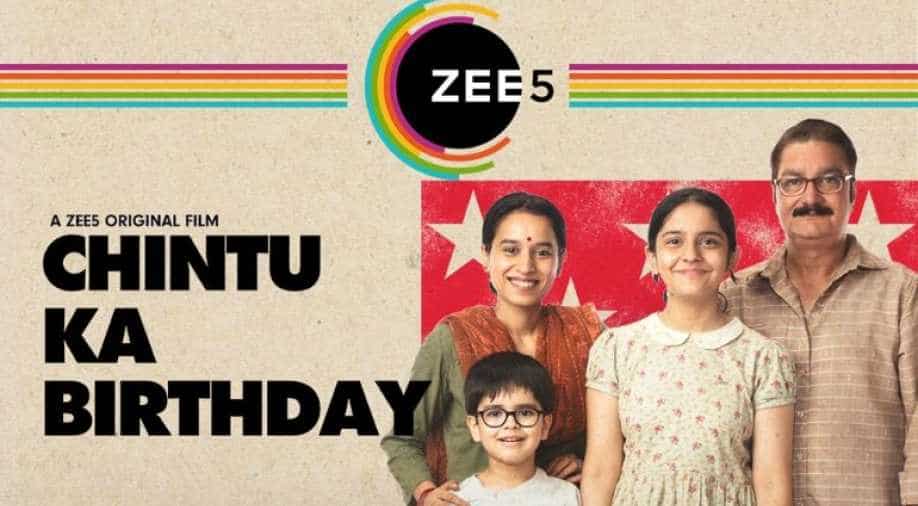 Vinay Pathak and Tillotama Shome's 'Chintu Ka Birthday' is finally getting a release. The film was to premiere in 2018 at MAMI film festival but was dropped from the festival as it was backed by comedy collective AIB. Some of its members got embroiled in Me Too controversy and festival organisers decided to drop the film.

Now, two years on, the film is all set to premiere on streaming platform ZEE5. This will be the OTT platform's fourth original film after the release of Bamfaad’, ‘Ghoomketu’ and ‘Ateet’.

This family drama revolves around a 6-year-old named Chintu, stuck in Iraq with his family in the times of Saddam’s fall. A simple, innocent aspiration to celebrate a child’s birthday is beautifully compared to worldly problems in this unique narrative of an endearing middle-class family tackling the extraordinary situation of the war. Will the world come together to cut the cake or rob Chintu his moment of joy? ‘Chintu Ka Birthday’ is a complete family entertainer with several thrilling moments interspersed between humor, fun, and joy, in a heartwarming drama.

Vinay Pathak portraying the role of Chintu's father says, “ 'Chintu Ka Birthday’ is the most important film of my career, as well as my association with the new immensely talented director duo Satyanshu and Devanshu Singh. They’ve written an amazingly crafty and sensitive film with gentle humor and huge hearts. It’s surprising to learn that it’s their first full length feature film. ZEE5’s decision to release it on their platform is visionary and praiseworthy. It’s a film any platform would be proud to have in their kitty.

Once you’ve watched it, you’d know how true and worth every praise is for the film. It’s an ensemble film, about a family, about being a family in dire circumstances, even if it means being stuck in a place for an indefinite time. I take immense pride and great pleasure to invite you all to attend ‘Chintu ka Birthday’ on the 5th of June, on ZEE5, a humane celebration of life you’d savior forever.”

Directed by National Award-winning filmmakers Satyanshu & Devanshu Singh and produced by First Draft Ent, this film will be exclusively released on ZEE5 on 5 th June.

“We have grown up watching how our parents put our needs above theirs, sacrificing for us in ways big and small,” Devanshu recalls. “The grandparents narrating stories to their grandchildren, the love of the elder sibling for the younger one, how a neighbour is also a part of the family.”

“The film for us is a beautiful confluence of two realities – the family life we have lived back home in Bihar and the influence of world cinema,” Satyanshu says. “We were also deeply inspired by Sooraj Barjatya when we were growing up. He showed the commonplace details of weddings. We did that with a birthday. Singing an impromptu song, blowing balloons, fighting and cajoling among loved ones – this is all Sooraj ji.”

Tillotama Shome, essaying the character of Chintu' s mother says, “As Chintu's mother, I invite you, to Chintu ka Birthday. A film about a birthday in the midst of a lockdown. A film about a family that manages to choose hope amidst chaos. Zaroor aaiyega, humaare saath birthday manaane.”