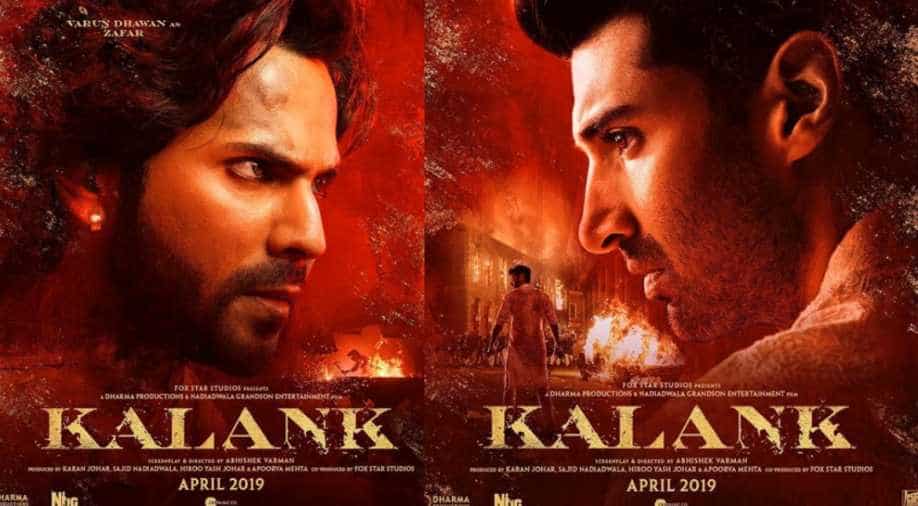 ‘Kalank’ is directed by Abhishek Varman and is scheduled to release on April 19.

All those waiting for any information on Varun Dhawan and Alia Bhatt’s film ‘Kalank’ can rejoice as the makers have now released the first posters of its characters.

Varun also shared the same post and tweeted: "It's been a hell of a journey playing this gem of a character. So guys, meet Zafar!"

It’s interesting to note that the posts carry the hashtag #MenOfKalank implying that other character posters will soon be released.

In fact soon after, Aditya Roy Kapur’s character was also revealed. He is named Dev Chaudhry and Karan captioned the post as: “A virtuous heart with an uncorrupted mind. Presenting Dev Chaudhry.”

Sanjay Dutt's look as Balraj Chaudhry is also out:

Karan also shared the idea behind making ‘Kalank’: "A film that was born in my heart and mind 15 years ago... A film I passionately believe in... The last film my father worked on before he left us... It was his dream to see this film come through... I couldn't fulfil his dream then... My spirit was broken... But today his wish has found a relationship with celluloid... The story of turbulent relationships and eternal love has found a voice.”

A film that was born in my heart and mind 15 years ago....a film I passionately believe in...the last film my father worked on before he left us....it was his dream to see this film come through....I couldn’t fulfil his dream then....my spirit was broken....but today his wish has found a relationship with celluloid....the story of turbulent relationships and eternal love has found a voice....the film has been woven,nurtured and visualised by ABHISHEK VARMAN....and the film Is KALANK! Set in the 40’s but it’s heart lives on.....TOMORROW the journey begins.....am excited ...anxious and emotional about this one...I do hope you join us on our path to undying love.....#KALANK

‘Kalank’ is directed by Abhishek Varman and is scheduled to release on April 19. The film also stars Sanjay Dutt, Madhuri Dixit and Sonakshi Sinha in pivotal roles.