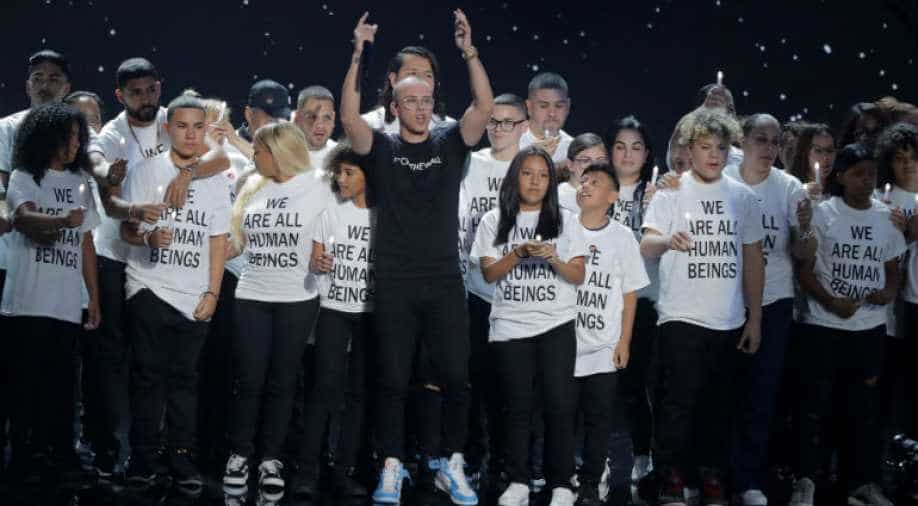 Dozens of immigrant children and their families, wearing white t-shirts saying "We are all human beings," joined rapper Logic on the VMA stage for his song 'One day.'  Photograph:( Reuters )

The show kickstarted with a roast of Donald Trump. Tiffany Haddish and Kevin Hart opened the show and reassuring the crowd that they could express themselves freely at the show, at least more freely than an NFL player can. “We are live coast-to-coast, people. I’m looking at this like it’s game day,” Hart said. “But do not worry. For this game, you’re allowed to kneel. You can do whatever the hell you want. There’s no old white man who can stop you.”

Dozens of immigrant children and their families, wearing white t-shirts saying "We are all human beings," joined rapper Logic on the VMA stage in New York City for his song 'One day.'

The song and a new music video protest the zero-tolerance policy that saw thousands of immigrant children separated from their parents in June after crossing the southern border with Mexico without documents.
The National Domestic Workers Alliance said in a statement that they and two other groups had helped to organize the performance.

Cardi B, in her first public appearance since giving birth to her first child in July, picked up an early win for song of summer for her dance hit 'I Like It' with J Balvin and Bad Bunny.

The 25-year-old singer went into Monday`s fan-voted ceremony with a leading 10 nominations after a breakthrough year that saw a string of brash female empowerment hits like 'Bodak Yellow.'

It was also a big night for recently engaged Ariana Grande, 25, who won the best pop video award for 'No Tears Left to Cry' and was making her first public outing with fiance Pete Davidson.

Jennifer Lopez brought the audience to its feet with a song and dance medley of her biggest hits as she was presented with MTV`s annual Vanguard Award, named after Michael Jackson, recognizing her 20 years in show business.

"It`s been an incredible journey of dreaming my wildest dreams, and then watching them come true," said Lopez.

Childish Gambino, the music stage name of actor Donald Glover, earned seven nominations for his hard-hitting video 'This Is America' about black identity and police brutality.