Trot is hot: It's not just K-pop in South Korea 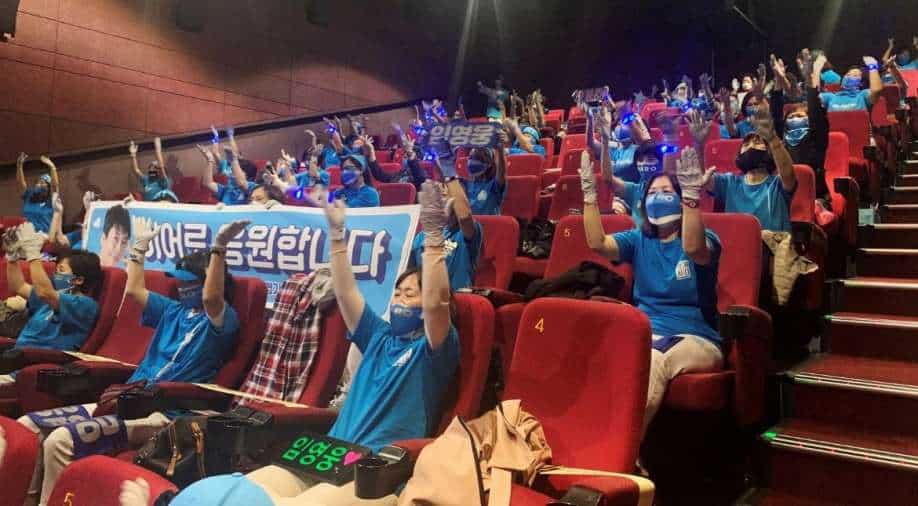 Trot is hot: It's not just K-pop in South Korea Photograph:( Reuters )

In a film theatre near Seoul, scores of middle-aged South Korean women in matching baby-blue T-shirts, hair bands and face masks inscribed with the word "Hero" are screaming, singing along and taking selfies.

They are some of the 135,000-member fan clubs of top male South Korean singer Lim Young-Woong, gathering to watch "Mr Trot: The Movie", a movie featuring him and other singers who perform the country`s oldest form of popular music, commonly called trot.

Lim`s fan club is called 'Age of Hero', after the singer`s name which means hero in Korean.
Once ridiculed as music for grannies, the trot is making a comeback and many South Koreans, mostly in their 40s and above, are cheering an alternative to K-pop idol music in one of the world`s fastest ageing societies.

But at home, trot signers performing old ballads have seen the biggest increase in fans, according to top portal website Daum that analyses growth rates of fan clubs and their social media activities.

"Our country is ageing, but it is hard to find songs that bring emotional empathy for the elderly population because the music is too idol-oriented," said Park Woo-Jung, 54, a member of Age of Hero.

Although considered uncool by youngsters, trot music has a broad national following with a storied history of success going back before the birth of modern K-pop. The music’s melancholic lyrics of unrequited love or yearning played to a repetitive beat has resonated with babyboomers and retirees, the generation that helped build Asia’s fourth-largest economy.

Today, fans of the genre have become an economic force to reckon with and many use their unlimited data plans to plug into streaming sites or vote for their favourite stars at awards, embracing ways of K-pop followers.

"Fandom of the middle-aged and elderly is unconditional," said Jung Duk Hyun, a pop-culture columnist. "They have time to listen all day. They have money, and think their stars energize their life, then aggressively invest by buying and clicking."

When Lim of Mr Trot became the model for a Ssangyong Motor SUV this year, sales surged 63% in May and 98% in June compared to the vehicle`s monthly average sales between January and April this year, the carmaker said.

Song Jong-Choon is a fan of trot singer Song Ga-in whose songs, he says, "heal his broken soul," especially the one about lost hometowns that remind him of the countryside home he left. He doesn`t hesitate a moment to support her career.

"We are old, and many of us are in the 50s who have economic power, so normally don`t mind the spending. But, if you are a (K-pop) idol fan, you have to do a part-time job to buy a concert ticket."

The song is head of Song Ga-in`s fan club "AGAIN" with 57,000 members and six regional chapters. The club has its own guide book to show how to subscribe to streaming sites and click likes for her music videos.
The living room of his apartment is decorated with giant photos of the singer and merchandise in her signature pink ranging from aprons to cushions with the singer`s pictures.

The trot is unlikely to reach the global success of K-pop largely because of the language barrier, but fans believe their fandom as something special, treating their stars as if they are their own children.

"BTS has (its Fanclub) ARMY but we are Mommies," said Hwang Eun-Jeong, a 52-year-old housewife and a member of Lim Young-Woong's fan club.